Hi everyone - I can barely express how hectic, important, and downright awesome this week has been for Underdogs. It has involved:

Oh, and it also involved the book passing 600 pre-ordered copies and passing 500 backers. I’m seriously struggling to comprehend how well-received this book has been so far, and it’s two months away from even coming out!

So to cover these bits of news one at a time:

At long last, we are able to share the specific date when Underdogs will be released. And it’s Thursday 30th May 2019. We had known for a while it was going to be May, but personally I have no complaints about waiting until the end of the month to ensure the book is as good as it can possibly be.

I mean, I’ve been writing it (on and off) since 2010, taking it seriously since 2015, and been on this publication journey since March last year. I don’t mind a few more weeks. (Releasing it on May 20th – Takeover Day in the Underdogs universe – would have been great, but quality must come first.)

For anyone who hasn’t seen these images blasted across Facebook, Twitter and Instagram yet, feast your eyes on the cover Unbound’s designer came up with. Isn’t it awesome? 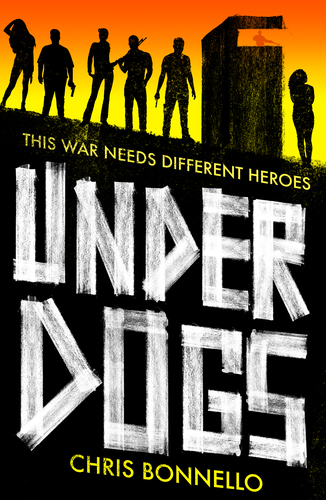 If the journey to publication didn’t feel real before, it certainly feels real now.

I’ve been told that the final deadline for Underdogs’ reward stage (e.g. having your name/a loved one’s name in the book etc) is midnight on March 31st. So if anyone reading this message hasn’t pre-ordered yet, before the end of the month would be the best time!

4) And finally, some news of epic proportions…

Are you ready for this?

A SEQUEL IS COMING!!

Yep, I can't believe it either. The first book isn't even out yet, and I've already received a contract to sign for Underdogs 2.

I've had an 'unofficial yes' since I met the publisher face to face (wow, I had a lot to deal with on the drive home), but now the contract's in my hands I can announce it properly. The sequel has already been written, so there'll be no delays in getting the project underway.

So what's it about? Well obviously I can't go into many details without referring to the events of Underdogs, but the second instalment amplifies everything. The stakes in the war (which the heroes are guaranteed to lose unless they get absolutely everything right). The personalised connection between the Oakenfold teenagers and the war they're fighting (which I absolutely can't spoil). The emotional turmoil, and the toll the war takes on the students who have unimaginable pressures on their shoulders.

The Underdogs are returning. I'm in no position yet to offer dates, but it's safe to get hyped now. And once again, thanks so much to all of you for getting Underdogs into this position.

Wow, there was a hell of a lot to write about in this update. I hope you’re as excited about this as I am – things are falling into place quite nicely, and just like in the book itself, the action on the publishing side is coming thick and fast.