A bit of important news regarding Underdogs 2

I'll keep it short, since I already sent out an update this time last week. Progress on Underdogs: Tooth and Nail (or Underdogs 2) is going well both online and offline... and I'd like to give me sincere thanks to the 26 people who have pre-ordered it since I announced the deadline last week! We're only a dozen copies away from hitting 500, and the book's still a few months away from publication - which means, just like the original, Underdogs 2 has sold more copies in its pre-order stage than the average novel does in its opening year post-publication. Thank you all, so much.

1) The deadline for pre-orders via Unbound has been extended to midnight at the end of Monday 3rd February. I asked for an extension for those who really want their name in the book but don't get paid until January 93rd, and Unbound were kind enough to say yes!

2) Against my better judgement, I've started work on a third Underdogs-related short story - this one being added to Ewan West Goes To Oakenfold and Jack Hopper Talks To Dad as thank you presents to those who have helped the sequel come to life. Joseph McCormick Fights Alone will be a difficult one to write (it has themes of bereavement among other things), but it'll get written and I'll let you know how it goes.

That's it from me - feel free to join Underdogs' Facebook community if you want more frequent news about how this series is going, and here's the link to Underdogs 2 one more time.

Untied by our differences, 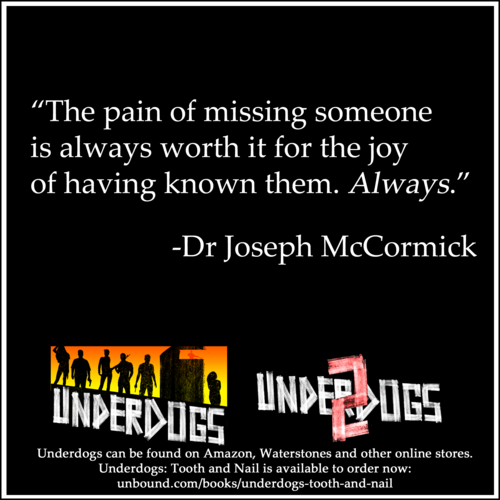