Well, it's been a long, long slog, but the FINAL Underdogs book is almost fully funded.

At time of writing, we're just over £700 away from hitting 100% and the publication process beginning - and the series starting the final leg of its journey to the end of the war. The merch options are still available of course- if anyone wants an Underdogs shirt, mug, pin-badge or all three of them, they're all available. Supporters' names will still be printed in the back of the book as a thank you for bringing it to life. More than anything else... you'll get to see how the series ends. (And call me biased, but I personally think the final showdown is awesome.)

Crowdfunding fatigue is a real thing. And this fundraiser has been going since last November. (The reason it's needed so long is because its target is more than triple what book 1's target was, plus the fact that nobody reads book 4 in a series without having read books 1-3. Frankly, it's incredible that Uprising is doing as well as it's doing, which is a real credit to its readership base, including you.)

But now I want to start giving people exciting updates about where the book is in the publication process - whether I've seen updated cover art, funny things that happen in the editing process, WHETHER THERE'S A RELEASE DATE YET, and so on. It's where the publication journey gets hard, but it gets fun.

So I would love for this to be the last "let's hit 100%" update I ever need to do for Underdogs: Uprising - we're only 6% away from the grand finale being sent to Unbound and edited... and ultimately, every loose thread in the series being tied off neatly (from Shannon facing her father, to the fate of James Arrowsmith, to the character arcs of Ewan and Oliver Roth).

I am so excited. Let's finish this. 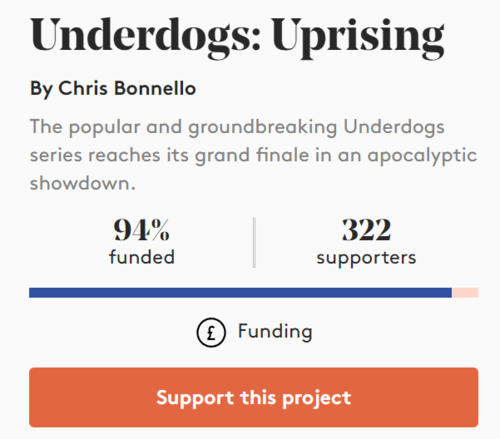