So you may have gathered by now, but.... Underdogs: Tooth and Nail has been released!! And with the messages and reviews trickling in, I'm feeling rather happy with how it's been received so far. (I'm particularly relieved by those who have told me it's "even better than the first book", because honestly that's been my opinion for a long time.)

A quick update for those who supported the series, but have NOT yet received your book:

Due to COVID-19 (I mean, what isn't these days?) Unbound have played it safe by only sending to "confirmed" addresses- those who clicked "confirm details" in a recent update email. I've had a few messages from followers saying they haven't received these emails, and perhaps the junk mail folder absorbed another bunch of them.

But just in case, step one should be to go through your emails back to May 13th, and look for an email titled "Hello, your copy of Underdogs: Tooth and Nail is almost ready to go." If you find it, open it, find your address and click "confirm details".
If the email doesn't exist, send an email to support@unbound.co.uk with your current address, saying who you are and which book you ordered, and Unbound will sort it manually.

A quick update for those who supported the series, HAVE received the book, read it and actually even enjoyed it:

First off, thanks very much!

In the next few months, Unbound will be making a decision regarding the third book- Underdogs: Acceleration. I'm assured that it's on their agenda, although the final decision will be based on sales, and how confident they are about the market being there for the series to continue. So with this in mind, here are the best things you can possibly do to ensure the continuation of the Underdogs series:

1) Recommend the series to family friends, schools, librarians, and basically anyone who will listen. And even those who won't, because why not.
2) Write a review - seriously, reviews are hugely powerful. If you feel able to do so, here's Underdogs 2 on Amazon, and here's Underdogs 2 on Goodreads.
3) Follow Underdogs on Facebook and share stuff from it.

That's it for this update- to those who have received the book, thanks a ton for supporting the series and I hope it matches/has matched your expectations. To those yet to receive it, I hope this email has helped and that you enjoy it when it comes.

United by our differences,
Chris Bonnello 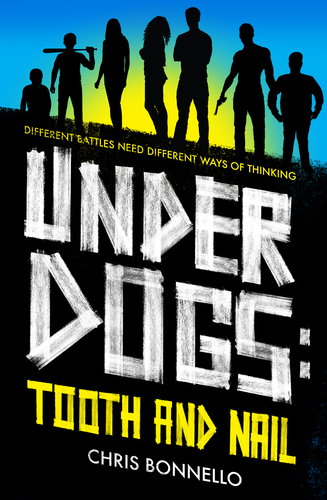