Underdogs 3 has just been launched!

The Underdogs have returned, and the next journey has begun.

I'll cut to the chase - for anyone who's been waiting for news about Underdogs: Acceleration, the book has been launched on Unbound and the pre-order link is right here!

And honestly, the response to the campaign so far has flabbergasted me. And I'm not the type of person who uses the word "flabbergasted" often. On the first day of the campaign, the book became 30% funded before I went to bed. At time of writing, it's on 46% thanks to 105 supporters.
(To hammer it home further- the target for Underdogs: Acceleration is more than twice as high as the target for the original Underdogs - due to more ambitious things like getting it into physical bookstores. It took 35 days for Underdogs to reach its target. Underdogs: Acceleration passed the same number last night, after 3.1 days.)

I seriously can't believe how well-supported this series is. Thank you to anyone reading this who has already supported it.

Meanwhile, I'd also like to thank Unbound for making the project look so beautiful. I mean, look at the extra products on offer here. How awesome are they?! 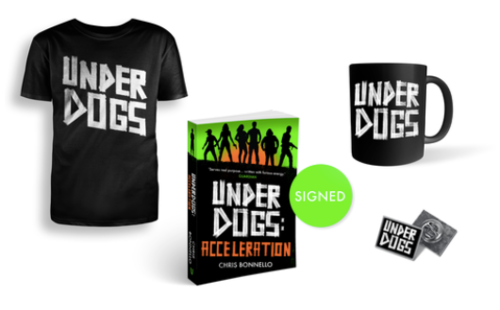 Just like the Underdogs: Tooth and Nail crowdfunding journey, there will be bonus content exclusively available for people who bring Underdogs: Acceleration to life (including the upcoming Underdogs Christmas special!). I'll keep people informed as and when things happen, mainly on Underdogs' Facebook page.

And, just to clarify again, this is the link where Underdogs: Acceleration can be pre-ordered from.

United by our differences, everyone. I look forward to seeing what happens next!
Chris Bonnello