Details about the publication of Underdogs 3 (including release dates)

So for those who haven’t seen yet, Underdogs: Acceleration has now hit 100% and is due to be published. It is nothing short of phenomenal that the third book in a series, with a target more than twice as high as the original, got fully funded in under two months. Thank you so much to all 273 of you (to date) who have brought it to life.

The day after it hit 100%, I had a phone meeting with Unbound to discuss our next steps. The main headline is that those who pre-order the book will probably get their copies SIX MONTHS before the general population do. Let me explain (with a TL;DR version at the end).

The plan is to release all three Underdogs books in actual, real-life bookshops. Unbound are experienced enough to know that releasing a novel in the autumn is a death sentence for sales (you'd think the Christmas trade would help, but it basically means new fiction books/series are sidelined in favour of big and famous non-fiction books by celebrities). If you want a new series - or at least new to bookshops - to get optimum attention, then spring is the season to aim for.

Therefore, the "official" release date for Underdogs: Acceleration is likely to be February 2022.

BUT- before your jaws drop in shock- if you pre-ordered, you needn't worry about waiting long. Unbound recognises the strength of the Underdogs community, and I've made it clear that I believe those who brought the book to life deserve it ASAP. Unbound agree.

So here's the TL;DR (Too Long; Didn't Read) version:

1) Those who pre-order Underdogs: Acceleration will most likely get it in the autumn sometime.

2) The pre-order campaign for Underdogs 4 (the finale) will probably start around the same time. Because let's just say that at the end of book 3, you will want book 4.

3) To the general population, the book's release will be February next year.

This may be good news or bad news depending on whether you've pre-ordered the book. But for those who haven't yet, here's the link to go if you want to read the published version this year instead of next year.

PS- Oliver Roth's origin story is now uploaded as a thank you gift to everyone who pre-orders Underdogs 3. I hope you enjoy it. 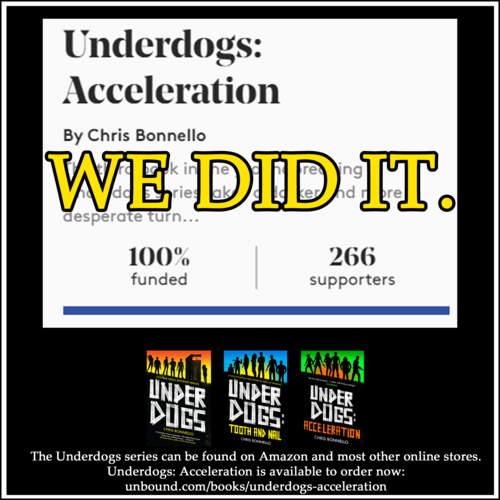