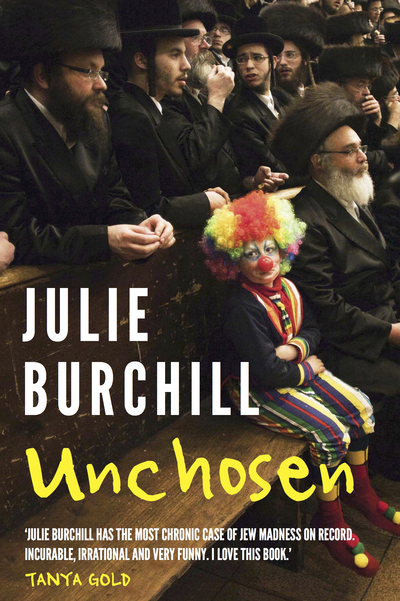 Women
You made Unchosen a reality. It's available in all good book stores now.
$4
82 pledges

Everything up to and including Collector’s level plus a handwritten postcard from Brighton from Julie. In Hebrew.

Everything up to and including Collector’s level plus 2 tickets to the launch party in Brighton at Julie’s favourite restaurant, Alfresco.

Everything up to and including Collector’s level and you can join Julie for a small Israeli-style Shabbat celebration at a Jewish restaurant in London.

All the above plus your name as patron on a roll of honour in the front of the book.

They say you never get over your first love and in my case, they were right. But, typically greedy, my first love was a whole race of people - the Jews.

What started it? I was a blonde, popular, well-parented West Country schoolgirl, about as likely a convert to militant Zionism as Daphne from Scooby Doo. From what I can understand, I feel that I was most likely zapped, galvanized, struck by some invisible lightning of mind-restructuring incredulity at That Moment, aged fourteen, when I came across the installment of my dad’s The World At War part-work which - Dealt with? Exposed? Explained? Even at this distance, some forty years on, I can’t find the right word, and I’m quite good with words - the Holocaust.

From that moment of part-work revelation I was already on my way to being on my way, insofar as a land-locked pre-pubescent could ever be, packing up my childish effects in the spotted hanky of my tiny, shiny mind and getting set to hit that one-way trail to the Promised Land. From there on, it all just mounted up. The evidence. The unfairness and cruelty towards them from all corners of the world. The stoicism, intelligence and eventually the hard, cold anger - steeped in stoicism and intelligence - they reacted with. Yes, I was a popular, well-parented little blonde girl from the West Country who grew up loving the Jews, as Patti Smith’s poem Judith puts it, 'like the Jews love the land.'

I have been a journalist since I was seventeen and have written novels, memoirs, and biographies but this is the most difficult, most important book I’ve ever tried to write. And because I want to write in my own way, I’ve decided to publish it through Unbound.

Please help me make it happen!