Twice The Speed Of Dark

What does it mean to care about the deaths of distant strangers? What does it take to bear the loss of a child?

The Thrill of the Ride

I don't stop being blown away by the support of people, the goodwill that is shown when a pledge is made for an unknown entity, a book you can't even hold. From that alone, the world is made a better place. My own personal version of the world is made an enormously better place of course, but in a more general way, qualities that are an antidote to the frightening politics of the moment must surely be enhanced by systems that promote the sort of kindness that is investing in the potential of another, with no monetary or tactical reward as motivation.

It is a wonderful, if hopefully temporary, thing too that I currently have little experience of writing and of the world of writing. It is one of my favourite states, being a thrown-in, wide-eyed, enthusiastic beginner. Everything is a new opportunity, all is a potentially valuable or exciting experience. Everything is worth doing. It is the best time for bothering. From suddenly deciding to have an interlude go at writing a screenplay to talking for the first time about my book to an interested audience at The Writing Cafe, it's all potentially informative and valuable.

When I was younger, I travelled around a lot, moved to different countries. It's not quite this crude, but basically, every time I broke up with a boyfriend I left the country. I never got bored, because everything was always new, no sludgy tedium or grubby aftermaths. This was a great strategy, until I realised that I was essentially a total commitment-phobe. One of the thrilling things about having written a book was proving to myself that I had the metal to be more than a cheery kind of goldfish/butterfly/Jack-the-lad hybrid.

Though the downside became gradually innescapable, the godsend of this strategy was summarised perfectly for me once in a dream. At the time I was working as a community artist at a youth centre. I set up a skate-ramp in an art gallery. In my dream it became a long and complex downhill swoop. I decided to have a go, and man, I killed it. As I flew along, I recognised that I was doing so brilliantly because I'd never fallen off, I didn't know how much it hurt. This was a once-in-a-lifetime opportunity.

(In a sense, I owe my writing to this project too as one of the conditions of being artist in residence was that I write a blog, the first public writing I'd done, the first time I experienced writing outside of study or journals, or professionally, artist's statements and project applications.)

One of the great treats of writng for me is in both overcoming that tendency and fostering it. Whilst I am often hidebound by the thrill of the new, I only went and wrote a whole book. It was hard. It was a precious kind of difficult. And it took three years. The only thing I've ever done that took longer than that was being a mother. I hope that the combination will prosper. The world is endless, the mind vast. It may never stop being a thrilling series of discoveries and a lengthy digging-in until I pop my clogs. What a happy thought.

Photo: Left, constructing the ramp in Fabrica art gallery, Brighton. The gallery is in a converted Regency church. I was Artist in Residence for Brighton Youth Centre, in association with Fabrica 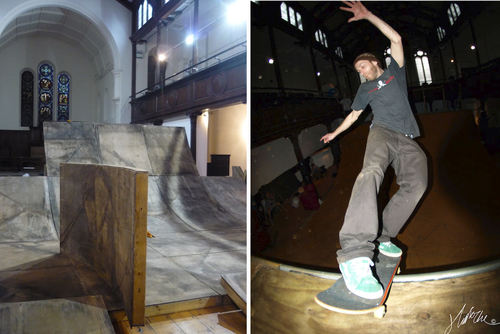