Twice The Speed Of Dark

What does it mean to care about the deaths of distant strangers? What does it take to bear the loss of a child?

If you go down to the woods today 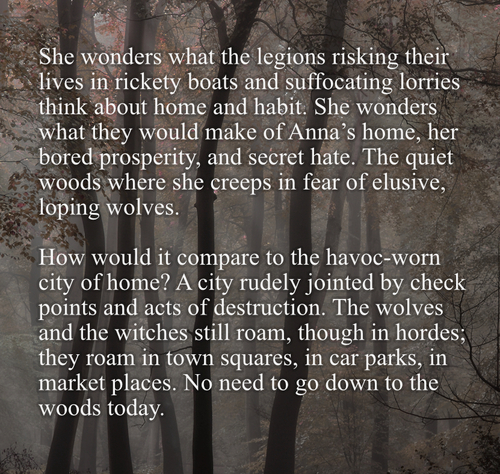 Anna, one of the main characters in Twice the Speed of Dark, is stuck in a pattern of avoidance, of flight. She exerts huge efforts to skirt the traps and pitfalls that live, echoing loudly, chiming their danger, within. It is memory that she evades. She cannot think about her daughter without thinking about her death and being tormented anew by the pain of it. The book in part is an exploration of whether she can break free of that eternal loop of avoidance and the stultifying hinderance of life that it entails.

The portraits she writes are of people whose torments are political, geographical. Their dangers are guns and bombs, rampaging assassins or misguided fools who would see them die for advancement of pointless propagandas and endless, conclusion-less battles.

Anna feels a sickly, uneasy guilt in part at how easily the deaths of complete strangers are served up to her as part of her news - as entertainment or diversion. It is in order to acknowledge them, their reality, her affinity with their multitude losses, that she begins to write portraits. She also knows somewhere that she allows this form of anger, on behalf of strangers because it is safer for her than the rage that has made a home in her bones, the fury she cannot dispel caused by the death of her daughter, at the hands of a kitchen tyrant, a violent bully whose arena was domestic, small-scale but lethal. Two types of death caused by people who chose not to constrain their own desires to hurt.