Writing with conviction about a given, if imaginary setting, is essential. So it was that Patrick found himself on a flight to northern Finland to frame the borderlands of Ayon, the dark, icy wastelands to the east of the Divide.

I’d done a handful of winters living in Detroit in my early twenties and been back since, but such an urban setting didn’t lend itself to the borderlands of Ayon. When my friend Paula and I started to discuss travelling to Finland – she’s a Finn so it was an obvious choice – asked me what I wanted to get out of it; the three things I wanted to experience were extreme (by UK standards) cold, perpetual darkness and isolation. If we could achieve two out of three, I felt I could live with that.

To achieve the goal of experiencing constant darkness, with no planetary rotation Ayon exists in total darkness, our trip had to happen around December time. Unbelievably this coincided with the 100 year celebration of independence from Russia so we timed it so we would be in Helsinki for that night. It was quite an incredible experience, a fair proportion of the population dressed in dinner jackets and ball gowns, wandering the streets and congregating in Senate Square. Bowls of fire adorned the steps of the Cathedral which itself was surrounded by a choir. I don’t know what they sang but it must have been something akin to Sir Hubert Parry’s take on Blake’s Jerusalem as I noticed Paula surreptitiously wiping away tears. 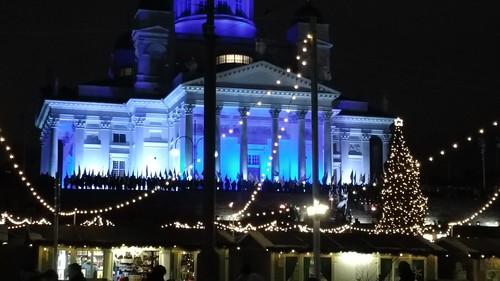 On to Kittila, a ski resort just inside the arctic circle. The flight took place at sunset, so about noon. From the air I spent a lot of time studying the scatterings of lakes and the littering of small woods. Everything was so grey and white, bare tree branches seemingly bleeding into the snow, or that’s how it looked. As we descended to land the moon rose low in the sky, a brilliant pink that caused a later argument with my wife (sub-editor) who thought it preposterous that a moon could look pink. This discussion re-enforced my feeling that you must go to these places if you possibly can.

Paula had rented a small cabin for us somewhere north of Kittila. It wasn’t isolated as such, but it was sufficiently remote that it concentrated your mind. Making such a fundamental mistake of locking yourself out would be a real problem at -25C, and that’s without the wind chill. We walked for miles. You could walk and walk and walk with seemingly no sense of tiredness. The air was dense and curiously tasteless, the snow underfoot earsplittingly loud. This I found very odd, it invaded your thoughts as it crunched down in juddering stages under each footfall. 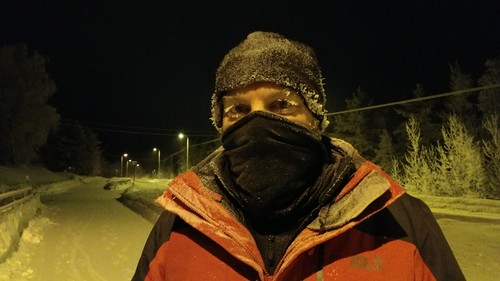 Towards the end of the first walk we were drawn to a single, vertical shaft of light coming from a section of woodland. It was fenced off so we never did discover what it was but, seeing it in the distance, it was clear this was Nastra, the farthest flung human settlement in Ayon. Settlement is perhaps a bit generous, but it seemed to fit. When we returned I cooked, Paula raged a bit about the sauna which was apparently not up to Finnish standards and after writing down as much disjointed description as I could, I turned in. And slept, deeper than I have for a long time.

On day two we walked out onto the frozen lake situated not many yards from the cabin. I have to confess this was a slightly terrifying experience. I’d done it before as a child on the lake in Sutton Park, Sutton Coldfield and felt uneasy about it then, Now I was acutely aware I was around 8 stone heavier. It was a very desolate place, the wind howling up in the hills and squalls of loose snow skittering on the icy surface. It’s surprising how loud everything is away from the hustle and bustle of normal life. 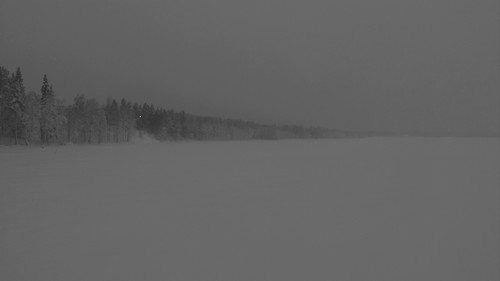 I was sad to leave and it was certainly a valuable trip. At the time I felt I’d only got a handful of sentences from it but as time went on and the writing was refined I found more and more detail creeping in. If nothing else the town name Kittila helped me on the way to figuring out the name for the enigmatic character of Benjamin Kittala who makes an explosive entrance late in the story.