I feel as though I've been spamming people with updates a bit of late, but we are at 76%, so here is the next part of Some Chequered Affection. The story starts here.

This is the beginning of the final "chapter" of the story, but it's a long one, so will be spread over three or four updates - and remember, the quicker we fund, the sooner the next update. Also, any new pledges or upgrades/increases before 5th November will get a option to name a character in my current project.

So, previously on Some Chequered Affection: Things are looking very bad for Fulbeck. Charles Morland, who has now lied for him three times, once for every dead body. Will he permit himself to be taken in by his lover's evasions, or does he have the strength to seek the truth?

Night once more, the curtains drawn and the shutters closed. Morland was light headed with hunger, but had spat out the sole forkful of food he had managed to carry to his mouth, hating how it felt on his tongue, heavy slimed with saliva. After that, he had retched for some minutes, finally managing to swallow a few sips of water, although they did not clear the taste from his throat, did not dispel the reek of his supper as it cloyed in the hot air of his room.

He longed for a cigarette, the taste of Turkish tobacco filling him and the air, making everything hollow and clean, but it wasn't worth another of his father's lectures about squandering his allowance, or the proper place to smoke. Nothing seemed worth anything.

He could not rid himself of the pale, bloated face of that poor soldier. The fish had begun their work on eyes he had last seen veiled with flirtatious refusal. All the blood had seemed washed out of the great gash across his throat. He could imagine how that skin would feel, clammy, cold, like mushroom caps, like poisonous toadstools damp from the rain.

Morland put his head in his hands, hunched over in his chair. The clock on the mantle ticked, hopeless. It would need to be later, much later, for what he planned to do.

With an absence that felt as though someone had stripped the skin from him, he needed Fulbeck, needed his teasing smile and his dark eyes and the ticklish fineness of the ends of his hair. He needed someone to lean against, to curl up in to, someone slim and strong, and smelling of books, of their secrets.

He would not cry. Would not. Not again, not any more. Tears were done, they were a boyish failing and he would not indulge them. He might not be much of a man, but he would not make himself ridiculous.

The clock counted out seconds, then minutes, chiming soft hours. Morland sat and shivered, wondering if he truly would do this thing, whether he could bring himself to carry it through. At times, he stood, paced, tried to read, shuffled a deck of cards, but always he found himself slumped back in his chair by the dying fire. After a long time, the maid came and took away his untouched plate. He could hear the Colonel downstairs, his hectoring voice carrying up to him as he spoke to his army friends about whether Germany was going to declare war on France or not, about whether 'our boys' should go out there and teach the Hun a lesson.

Morland had heard rather too much of it in the last few weeks, trapped at home, had stopped connecting these far away thoughts with the khaki uniforms of the Old Tailors, with the soldier blushing over his pint in that low pub in the town, the soldier who was now lying under coroner's eye, his throat opened by God knew what.

Graves had said, only that afternoon, that he would join up if it came to war.

He knew what the Colonel would expect him to do, wondered if he mightn't, at that. If Fulbeck...

But there, it was like exam jitters. No point dwelling on it before it was time. He would think more clearly if he simply plunged straight in. It was the waiting which he couldn't bear.

After a long time - past midnight, getting on for one - he heard the Colonel's friends take their leave, and then the heavy sounds of the old man preparing for bed. He gave it another hour, putting out the light in his own room and sitting, quiet, in the glow of the fire.

Then, in his tweeds, with his shoes in his hand, he forced the lock of his bedroom door with his penknife, and crept down the stairs. Going out, he left the street door on the latch behind him - in his pocket, he had the latchkey  he had neglected to return when he came back from the funeral, and the revolver he had taken from the drawer of the Colonel's desk.

And hadn't everyone said he had no pluck?

The streets were quiet. The city showed a different face at night, one closed, less friendly. Or perhaps that was the face it always had, beneath the mask it wore when daylight warmed it. Morland remembered that, as a child, he had always feared the dark, had needed a nightlight burning until he had been far too old for such things. He was far beyond the respectable streets now, among the narrow, squalid terraces where the factory workers lived. The shadows were menacing, unknown.

He could always turn about, return home.

After some time, the houses petered away in to the countryside. Empty fields stretching black to each side of him and night birds screeching like souls in torment. Pitch dark, and the road was rutted, turning his ankles, making him stumble.

All the same, he knew the way.

He pressed on, across the countryside, under the black sky. The night was colder than he had expected, and he was shaking by the time he passed the sleeping hamlet that strayed loosely around Fulbeck's house.

It was late. Once or twice, he had pulled out his watch, hoping to see the time, but the moon's light was clouded and deceitful. Behind its gates, the house was dark.

It had not occurred to him that that Fulbeck might be asleep. Standing, rubbing his arms, he wanted to weep, the energy which had carried him this far falling away to a deep, exhausted hopelessness.

He had had planned nothing beyond this point, had thought somehow that he would arrive and the house would be full of welcome and golden light, thought that he would fall in to Fulbeck's arms and all the misunderstandings between them would vanish in cool, sharp kisses.

The gun weighed down his every step, like a the lurch of being caught out in a lie. If he had believed that, why did he carry it? It was not something stolen lightly - Morland knew what would happen when the Colonel missed it. His stomach shifted, hunger and nausea playing against one another. There was too much confusion. He would rouse Fulbeck if need be, would wake him and demand... what?

Yet he slipped through the gate like a thief and, rather than hammering on the door, Morland shrugged his shoulders and sidled around the walls of the old house, peering though windows, trying to catch a glimmer of light. There was nothing, until he had circled most of the house, until he found the small back door and the oil lamp left burning on the window ledge. Leaning against the wall beneath the window was a roadster bicycle.

Without stopping to consider what he did, Morland tried the door. 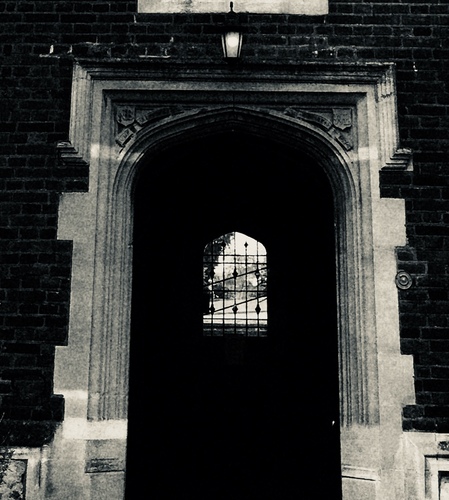 Letting himself in to Julian's house? I can think of some other young people who did just that, over 90 years later. But will this younger Julian be as forgiving?

Want to know what happens next? Read the next update here.