This is the seventh part of a free short story that forms a loose prequel to Time's Fool. It begins here.

Leaving Beechworth's funeral, Morland is shaken by Graves' revelation. But as he makes his way home, it becomes clear that violent events of the past month are not finished yet.

Morland had not wept. All the tears that he had not shed seemed to fill his whole body, to build inside him, salt-water turned to acid and pain. Yet, for all that, he would not weep. He would walk with his back straight and his aching legs until he was back in the over-hot prison of his rooms, and even then he would not weep.

It must be over now. He repeated the story in his head. Felicity's death had been a tragic accident, or the work of some maniac, some wild beast. Henry had been deluded, desperate, hit too hard by her loss. Tragedy had made its way through their little circle of friends, but now it was done. Everything else was just calumny and coincidence.

He had never minded that Fulbeck had other lovers. He had known it from the start.

The cobbles under his feet were dusty, leading him back through the streets to the Colonel's house. Graves had offered him a lift home in his new motor car, but the blaze of the sun had made him dread the stench of oil and leather, the heat of its gleaming fittings. Besides, the longer his journey took him, the longer he had at liberty, able to fill his lungs deeply, and see things that were not already stained by too many nights of furious grief. 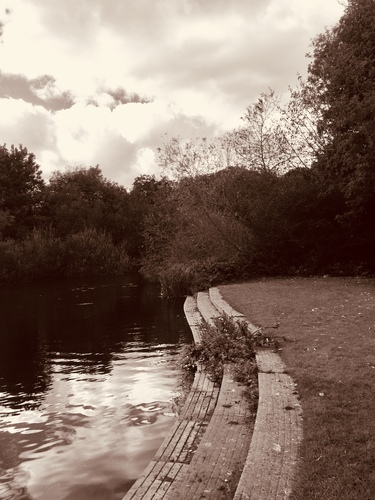 The same instinct turned him from the broad, residential streets to the dankness of the canal tow-path. Beyond the factories, towards the better class of houses, the stink of the water was less, and there were small cottages on each side of the steep, narrow banks. A few trees offered a little shade, and while the sun dazzled off the water there was at least a breath of chill in the air. For some minutes, he walked alone, eyes watering, able to think of nothing but shielding his eyes and not tripping. Then the sun dipped behind a cottage and he saw, ahead of him on the path, a group of men in dark clothes pulling something from the water.

At first, Morland thought they were labourers, but as he drew closer, he saw the uniform of the police officer, the sunlight making its buttons glint, and sending flashes of cruel light from the badge on his helmet.

“Sorry for the trouble, sir,” the policeman said, in a thick, familiar Barchester accent, “but I'm afraid you'll have to go about that way.”

Morland blinked, about to obey on instinct when something about the man's face caught his memory. “Constable Williams,” he said. It had been hard to recognise the man with the light behind him. The wonder was that he recognised him at all – the last and only time they had spoken, Morland had scarcely been able to stop shaking.

“Young Mr Morland,” the constable said, “Good day.” He took his helmet off instinctively, then appeared to recall himself to the scene, replacing it, looking at Morland's black suit. “Was it the young gentleman's funeral, sir?”

He nodded, “I'm afraid so, Williams.”

“My prayers are with his parents,” and a swift pause, “if that is not a presumption.”

“I'm sure they would be greatly comforted to know that.”

“No trouble here though, I hope, Officer?”

The men had stopped working while their supervisor spoke, no longer dragging their long nets across the river bottom, but leaning on the poles. Beside them, the cart was covered with a dark tarpaulin, but the comment seemed to recall them, to straighten them up a little. “Well, it don't look like suicide,” said one in an undertone, earning him a sharp look from the Constable.

Morland glanced at the cart. Beneath the tarpaulin was a humped form.

He swallowed to clear the sudden dryness of his throat.

“Begging your pardon, sir,” said Williams, “it is nothing to concern yourself with.”

“It's quite alright,” he said, not able to take his eyes from the covered cart. “What's happened?”

“Some children from these cottages, they were playing on the bank, and” and the constable shook his head, as though he dare not say any more.

Morlan felt the distant knock of grief for something that happened some distance away, and to someone he did not know. “Good god. A child, you say?”

“No, sir. Oh, Lord, no,” the good officer seemed embarrassed, “The children are all well. Although it upset them all, to see it, of course.”

“It's the weather,” said one of the labourers, “if we'd rain, we wouldn't of found him. He'll of stayed where he'd been put.”

“Don't talk about it like that, Pete. I don't want to think on it, with his throat all like that.”

“Come on now, lads,” said Williams, “remember this is a police matter.”

He turned back to Morland, about to say something else, probably about to dismiss him. But Morland spoke on some instinct, “You've found a body?”

Williams looked about himself, clearly considering denying the whole matter. Then, “I'm afraid so, sir.”

“And it wasn't suicide,” he looked down at his shoes. They were covered in dust, no longer shining and black, “or an accident.”

“No,” said Morland, “of course not, Officer. I quite understand. Only, I was just speaking to Graves – Albert Graves, um, Miss Felicity Graves' cousin?”

The name brought the flicker of recognition.

“And, of course, your man mentioned a throat,” he gestured vaguely at his own, with its tie almost strangling him in the heat, “and naturally, my mind - ” he shook his head, “but I do beg your pardon. A police matter, of course.”

Williams looked shamefaced. “Natural, sir, quite natural. And of course, I cannot speculate at this stage as to any similarities in the cases.”

“Not one of my set, is it?” He did not need to feign a shudder, he was already shaking again. “Dear God, I don't believe we could take much more of it this year.”

“I suppose we'll have to wait until the body's identified formally. I wish I hadn't come this way. Can't help fearing the worst, now.” He caught, from beneath his lashes, the constable wavering. “Although, I quite understand, I must -” he gestured to leave, twitching for his handkerchief.

“It would be most irregular,” came Williams' uncertain tones, “and the sight is not one that a gentleman such as yourself should,” he trailed off, and gestured to one of his lads, ““If you were able to identify him, Mr Morland, it would be of help.”

“But, sir,” said one of them, until Williams gestured him to silence.

“I would help anyway I can, constable,” he said, and stepped past the policeman to the covered cart. One of the workman gave him a hostile, measuring look, but drew back the edge of the tarpaulin. Underneath, the body was naked, pale and water-bloated, beginning to decay. His throat was one open wound.

“Where are his clothes?”

“Found him like that, didn't we?” said the man holding the tarpaulin, with a touch of relish, “couple of months down there, and we'd never of known him. Smart that.”

Morland pressed his handkerchief against his mouth.

“That's enough of that,” said Williams. Then he nodded to Morland, “To make identification difficult, but not impossible. You don't know him, do you sir? I wouldn't of said he was a gentleman by his hands.”

“He's a Private in the Old Tailors,” Morland said, looking away.

He made himself glance up, look the challenger in the eye, “My father is Colonel Morland,” he said, as though that explained it all.

“Yes. Of course,” said Williams. “Stop with your questions. If Mr Morland is right, then his uniform and insignia will be in the water. You ent paid to stand idling, like.” He made a note in his pocketbook. “Thank you for your help, sir. I shall ask at the barracks, to see if anyone's missed. That could give us a date, too.” A pause, “Are you quite well, sir?”

The body had been covered again, and the men were back to sweeping the river with various degrees of irritation. “Just an upsetting sight, officer.”

“Did you know him, sir? Personally, I mean.”

He tried to shrug, but could not make himself, “Merely a memory for faces, I'm afraid. All the same, thank you.” The tremor was moving though him, stronger, more than he could contain, “I would say I should rest easier, knowing that I didn't know him, but,” he shook his head, not letting the act drop for a few more moments, not letting his self control slide, “that poor man. What a dreadful...”

There was no need to pretend weakness. He needed to sit down, to find somewhere cooler and quieter.

Williams reached out to touch his arm, but seemed to think better of it, “There, there, sir. No need to worry yourself further. You take yourself home, with the compliments of the force for your help.”

Morland managed to murmur out something by way of farewell, and took the detour the constable pointed out to him, no longer able to see the bright cottages, the blazing sun. As he walked away, he heard the policeman's slow, Barchester tones murmur, “Well, of course it's too much for him. Today of all days. That poor boy.”

I'm sure it's all just a terrible misunderstanding.

The next update can be read here