Before we start, an ENORMOUS thanks to everyone who has pledged recently. And remember, I will be giving a signed, original piece of Time's Fool Landscapes artwork (approx A4) when I reach a hundred supporters - at the time of posting there are still SIX chances left to win this.

And, co-incidentally, this is part six of a serailsed short story which is a loose prequel to Time's Fool. It begins here

Some time has passed since Henry Beechworth took his own life. As a result of his beghaviour on that day, Charles Morland has been confined to his own room by his father, Colonel Morland. Our story resumes on a day on the day of Beechworth's funeral. 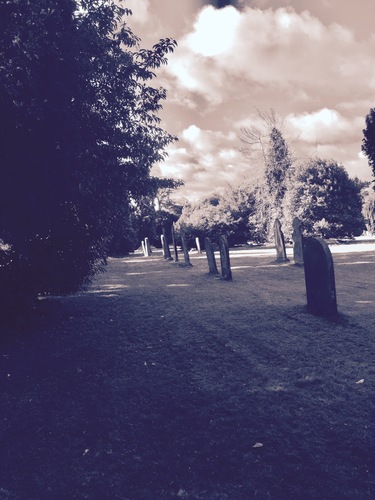 The weather had not broken, and the pall bearers' collars drooped and were marked with hair oil, sweat. Morland's legs were still sore, his thighs one long ache as he stood straight and still beside the hole in the earth, in to which the coffin was being lowered.

Even the Colonel had not felt it necessary to deny him the funeral.

It was a small gathering. Beechworth's brothers were there, called down from school on some pretence. Morland nodded to Edward, who had been in the same house as him, but they had not spoken. The only other person even near his age was Albert Graves – who accompanied his aunt, Felicity's mother. Still in deep mourning herself, she and Mrs Beechworth clung together, weeping silently.

Apart from that, it was only close family, a few locals - none of Beechworth's friends from Oxford, no distant cousins, barely any society friends. The whole thing had been done as quietly as was possible with the press scurrying about, probing every open wound. Even all of old Beechworth's influence had not quite attained a verdict of accidental death.

Morland held his hat, fingers sweaty on the brim, and tried to think of Henry as he should be remembered. But there was no congruence between the boy he had known all his life, and the awful, bloodstained thing they were at last tidying away under the earth.

The weight of the day pressed on him, too hot and still and close.

He should not feel relieved. He knew that he should feel anything but relief.

In the Beechworths' house, people talked in soft, sad voices and drank tea with too much milk in it. He stood to one side with Graves and faltered through bland conversations. In one of the many silences, Graves looked through the thin crowd who had come to pay their respects and said, in a tone low enough not to be overheard, “Appears your friend knows better than to show his face.”

Morland looked down to the cup of tea in his hand, its surface quivering with each movement he made. He had already paid his respects to Beechworth's parents, had been called a poor, dear boy, and shooed away, his presence bringing back, too strong, the circumstances of Henry's end.

He said, “I didn't think he'd been invited.”

“Of course not. But I hardly think that would stop him, do you?”

A little snort of something, somewhere between laughter and derision. “Half expected him, you know. Guilty conscience.”

He bowed his head again. “Ful-” but he caught the name before it left his mouth, “He had nothing to do with it. You must see that? Henry was,” but he faltered, unable to say that kind of word here, at this time.

Graves gave a pained smile. “Henry was quite in his right mind six months ago. All the same, let's not quarrel. Grateful you're here at least.” Another pause, the sense of something distasteful being broached, “I've been meaning to ask you, is this his hand?” He took the folded paper from the inside pocket of his jacket quite casually, as though it were nothing more than his card, or cigarette case.

Morland stared at it. “Henry's?”

“No. I rather think I'd know that for myself.” And now he glancing about him, gesturing for Morland to take it with small, jerking motions. Beneath his composure, Grave's face was motionless, tight.

The paper was rich, heavy, and the colour of the very top of the cream. It smelled – or perhaps he imagined that it smelled - of dust, and of vanilla, like the scent of a library on a rainy day.

“Why are you asking me?”

Graves pressed it in to his hand, then shrugged away, as though to distract anyone who might be spying. “Couldn't think of any one else who might know,” Another shrug, “rather sentimental stuff, I'm afraid.”

Morland unfolded the note, over which a heavy, elegant hand spilled out a pattern of darlings, and sweet childs, sentence after sentence on kisses and lips and captivating eyes. He did not need to read it to get the gist.

“Were did you find this?”

It was not addressed to anyone but, My dear one.

His neck prickled beneath his high, stiff collar. “I suppose so. I mean, it doesn't look like his.”

Graves nodded. “Sure enough to swear on it? In a court, I mean. Or at an inquest?”

“I,” but he could not make the next word come. How could Fulbeck be such a damned fool? “What is this anyway?”

“Don't take it any further but we found a bundle of them in Felicity's papers,” Graves' lips barely moved, and he spoke so softly that Morland almost did not hear it. “Uncle and I are trying to quell the rumours, but everyone knew how flighty she could be. I suppose Henry must have found out about all of it. Been meaning to show it you for a while now, in fact. Hope you don't mind.”

“Not the best day for it, I know, but I had to ask. If we could just find out who sent them.”

Forcing his hand to be steady, Morland returned the letter, “Sorry.”

Graves nodded, hiding it away again. “No help for it.” Then he rubbed his eyes, looking far older that his twenty two years, “Ghastly business. All of it.”

“And you're sure it isn't his writing?”

Graves looked down at the floor, as though a weight were pressing on him. “Wish father were still here, old man. He'd know how to go about the whole thing. Do you know, in one of the them, the fellow even tells her to burn the notes?” a little, bleak laugh, “Can't have known Felicity very well.”

Morland tried to think of something to say, something that would not be hideous, ugly or cruel.

“All the same. It's as though he knew. Knew that someone would end up going through her things.”

Fulbeck is not making it easy to believe in his innocence. Just how far will Morland's loyalty go?

Want more? The next part can be read here. Thank you for reading!