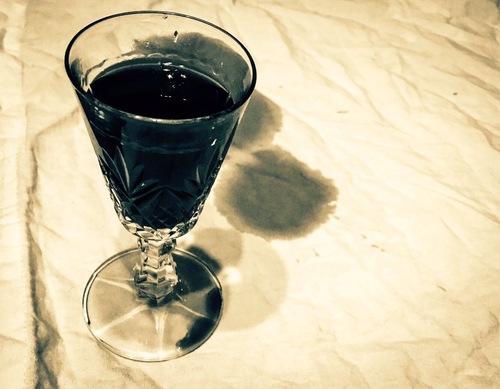 This is the fourth part of a serialised story that acts as a loose prequel to Time's Fool. It begins here:

Charles Morland has agreed to his lover's version of events, and made no more mention of the other 'accusations' in Beechworth's note. The story resumes later the same day.

The Colonel was eating. He did it with the savage pleasure of a man who had earned his repast, hands tight about knife and fork, the beef he hacked apart only slightly darker than his square, broken veined face. His every movement took up more space, made more noise than it had any right to – although it was clear from his busily moving jaw, in the wattle of flesh pushed up and out by his collar – that the Colonel believed he was justified to every bristle of his moustache, every huff of breath, every bite of bloody steak.

To his right, Morland twitched pale fingers, unwilling to touch the silverware, staring at the thin pink liquid on his plate, thinking of poor Henry, of the clotted blood on the wall behind his head.

Almost, almost he reached for his glass. But it was already half gone, and to drink more now would merely bring another lecture upon his habits.

The Colonel made a snort of dismissal, as though that were only to be expected. He had left a trail of yellow mustard in his moustache, and it hung there, unwiped.

Morland touched his own upper lip, as though to reassure himself it was still the fair, hairless thing Fulbeck had pressed with gentle teeth. Looking at the Colonel was like seeing himself twisted by the mirror of a fairy tale demon, made him need to check that his skin was still as soft, his bones as sharp as he had left them.

“You've heard about Beechworth's boy, then?”

He did not look down at his plate, not even needing to fight the tears he had shed earlier. He had known the Colonel's lack of tact would slam in to him, like a fist. He had rehearsed it. “Yes, sir. It's hardly the manner of news one might avoid.”

“You take that damned insolent tone with me, do you?”

Morland held his head up and did not think of friendship, of weakness, or of comfort.

“Nothing to say for yourself?”

Another clearing of the Colonel's throat, as he decided whether or not to unleash his temper in that parade ground bawl of his, the one that set the windows rattling, and had once been guaranteed to reduce Morland to fearful sobs.

He steeled himself, almost wanting the storm, needing something to hold himself resistant against. His collar chafed against the marks left by Fulbeck's more vigorous kisses, giving him strength.

“Boy was a damned fool,” the Colonel said at last, with a poisonous vehemence, staring at his son with angry eyes, “Damned selfish fool. Awful blow to his father, of course. Decent man, Beechworth. Good aim, even if he is a Liberal.”

“I imagine it was rather hard on poor Henry, too,” he said.

“Eh? Oh, the boy knew what he was about. No backbone, that's the problem with you young'uns. Can't bite the bullet when it comes to it,” he shovelled another forkful of meat into his mouth.

“I would say the problem was rather of the opposite kind, sir.”

“There'll have to be inquest, of course. Told old Beechworth that myself.”

“I'm sure that was a great comfort to him.”

“Poor Harriet,” mother spoke over him, with emphasis, “can't think how she'll be taking this. Such a delicate girl. Always was.”

“No, no, Tess,” said the Colonel, “let the boy speak. You had something to say?”

Morland did not look at his hands, not at the silver sheen of his knife, nor the bright pattern which edged his plate. He stared instead at a mark just beyond the Colonel's face, an arbitrary point picked out on the wall. “Merely, sir, that you have behaved with your habitual charity and reserve.” He kept his shoulders back, and swallowed hard.

Mother would be staring at him, horrified. He knew as much, although he could not chance to look her way in the fraction of a second before the Colonel's palm hit the table hard enough to send all the dishes jumping. Morland had been expecting it, but still, he flinched.

“You speak to me like that, you'll damned well look at me boy.”

Morland corrected his gaze by half an inch. The Colonel's eyes, bloodshot and bulging with rage, were the same deep brown as Morland's own.

“You haven't the key to the door yet. Remember whose house this is.”

“Rather difficult for me to forget it, sir.”

Another slam of the Colonel's palm on the table. “On your feet.”

“Is this the son I've raised, eh? About to start snivelling, are we?”

“No. Quite content to spend my money, aren't we, boy? To wear the clothes I've put on your back, guzzle my claret, and sneer at the food I put on your plate. Well?”

Morland locked his hands together behind his back and said nothing.

“Spend your time running with exquisites who teach you to cheek me, and God only knows what else. Well, not any longer, my boy.”

Morland wrung his hand about his wrist, pressing the bone until it felt as though it would bruise, but he did not look away and he did not speak.

“Not got an answer?” the Colonel demanded, “Well. I'll tell you what you shall do, sir, you shall sit down and eat every bite of that meal that has been placed in front of you and then you...”

“I am afraid I have no appetite, sir.”

In the silence as the Colonel gathered his next outburst, Mother said, “Charles, just apologise for goodness sake. You know not to speak to your father like that.”

“No, leave him to it, Tess. Finally showing a scrap of backbone, are we? Sure you're proud of your valour.”

“I try to do credit to the family honour, sir.”

“Honour, is it? Honour? When you're breaking your mother's heart? When you're dragging our name through the dirt with the company you keep? Well, not any longer, my lad.” He drew himself back from the table, might as well have been standing with a swagger stick in hand. “No. You're confined to quarters until you can show a face I'm not ashamed to admit to knowing. Thank your stars you're too old for a thrashing, although I shall if you put so much as another toe out of line. Do you know the rumours attaching themselves to your little set, eh? I wish to God young Beechworth had been more discreet, because there's only one inference a man can -”

Morland let out a bark of involuntary laughter. “That must be the first time you and Fulbeck have ever agreed on something, sir.”

For a moment, silence. Then, “I will not have that name mentioned in my house,” his voice echoed on the ceiling, rumbling through the very floor, tearing out of his throat, a wide, brutal noise, “will not have you fraternising with the likes of that man any longer. Get out of my sight, boy. Take yourself out of my sight, or by God, you will feel...”

But Morland was no longer listening, was already shoving his chair back and storming away from the table, not the cheerlessness of his rooms and all the dark thoughts that would bring, but out, out in to the night.

Want to read more? The next installment can be read here.