This is the tenth, and final, part of the loose prequel to Time's Fool, Some Chequered Affection. If you are just joining us, then it begins here.

Charles Morland has gone to confront his lover about the death of a young serviceman last seen in Fulbeck's company, but they have interrupted by another of Fulbeck's conquests. How's it going to end?

Things get a little heated in this chapter, so ... CN: violence, guns, blood, racism, classism and other slurs.

Morland stared, but Fulbeck met his eyes with utter calmness.

“I thought I heard a noise,” Fulbeck called up, “but it's nothing.” There was something different in his tone.

“I heard voices.” The man wasn't even local. If Morland had to guess, he would say the fellow was a tyke.

“Nothing, am I?” said Morland, not troubling to keep his voice down.

“I could ask the same thing,” Morland said, “though less quaintly.”

“It's no one,” called Fulbeck up, “you're half asleep,” and his words, his face, his whole stance changed as he snapped his attention back to Morland, “Growing jealous are we, Charles?”

“How else am I supposed to feel? Who the hell is that?”

“And this is why I keep you all apart.”

“What, the quality from the rough?” He felt as though he might spit, “Or is it merely that you don't want me to recognise this one when they drag him from the canal?”

Fulbeck took a step towards him, smiling like a villain. His teeth, Morland saw, for the first time, were not merely bad, but almost deformed. Ugly. “Oh, very good. That is impressively unkind,” he whispered, and his cold fingers touched Morland's cheek, “I didn't know you had that in you.”

Morland shook him off. “Don't speak to me like that.”

“Why not? I thought you wanted me to take care of everything. To fall in to my arms and have me soothe away all the loneliness, all the ways they misunderstand you.” His voice dropped lower still, a flow of venom, “all those cruel boys at your school, all the vain, silly girls, even your father...” He knew, somehow, that this was deliberate, that Fulbeck picked the barbs he knew would hurt most. Almost, almost, he buckled under it. 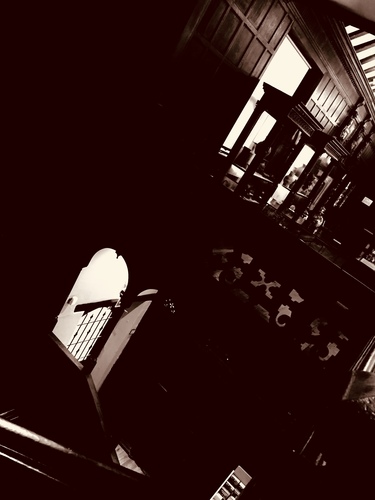 “Remember that I know things,” Morland said, “I know what Henry wrote about you. I know about Felicity, and I-”

“And what will you do with these things you know?” said Fulbeck, taking another step towards him, “will you go to the police and tell them I'm an invert and a murderer?” he gave one of his breathless laughs, showing another flash of white, pointed teeth. “And what then, my pretty Charles? What will this town say about you when they know the truth?”

“Julian,” the sound of footsteps on the stairs, “what's t'matter? What does thon want?”

At that voice, Fulbeck straightened away from him, turning, distracted, “Ben. I-”

Morland turned too, saw the figure coming down the stairs, and could feel nothing beyond the pain shredding every secret and cherished part of him. He laughed, short and vicious, “Small wonder you didn't wish to introduce us, Fulbeck.”

“Mr Morland was just leaving,” Fulbeck said without looking at either of them.

The boy coming down the stairs was dressed in labourers' clothes. His brown curls were tousled, and touched with the same suggestion of gold as his deep brown skin. He was barefoot and well-made, and his face was full of love, and humour and intelligence.

“So this is what you like to do, is it?” Morland spat the words.

Oh, they were both looking at him now.

“While I'm lying for you?” his voice was rising again, out of control. He must not become wild, must not let himself become ridiculous, but it was too late, too late, “While poor Henry is lying dead, and my name is getting dragged through the dirt, here you are, fucking your mulatto?”

“Charles, why don't you leave?”

“No,” said Morland, “no,” and he drew the revolver from his pocket, pointing it at Fulbeck who smiled pityingly and opened his mouth to say something unkind and belittling. What to do then, but to turn and level it at the boy on the stairs?

Who drew back a touch, his eyes wide. Other than that, he did not move, did not show any panic, or protest.

“You want a scandal, Fulbeck?” Morland said, “you want this little renter gunned down by a jealous lover, do you?”

Around them, the room was very still.

“Sir,” said the boy in level, careful tones, “I don't know what tha and Mr Fulbeck are talking of, but think on,” he put his hands up, fingers open, “is this fratch worth hanging thaself over?”

“It's me you're angry with, Charles,” Fulbeck's voice was careful, with none of that mockery or harshness, “I'm the one you should be threatening. Ben is nothing in all this.”

“He's something to you though, isn't he?” Morland said. He felt calm now, a stillness within him, “You know, I've always been a fair shot. People don't think it of me, but I am.”

“Aye, but sir, but this is murder, and tha art not the man to shoot another in cold blood. Let me come down now, towards thee, and tha and Mr Fulbeck shall talk.”

“There now, sir, reight calm,” said the boy, putting his foot on the next step down, his hands still in the air, “See? I shall not hurt thee.”

Morland clenched his jaw, tightened his fist on the pistol. The boy must be terrified, be fighting tremors and praying in his head that he would come out of this alive, but he did not show it, did not stop his slow descent of the stairs. If he had only shown it, had wept, had started pleading, then Fulbeck would have broken, would have agreed to anything he wanted.

Because Fulbeck was afraid, Morland could tell that. If he were not, he would have seized the gun by now. Morland was under no illusions as to who was the stronger of them, the less concerned by death and pain. Ben was the only advantage that he had, the only thing that would hold off Fulbeck's taunts for one moment, give him the space he needed to think everything through.

It would be so much easier if the boy were to cower, instead of walking forward still, all the time speaking to Morland as though he were an unpredictable dog in need of careful handling.

And with every step he took down the stairs, the smaller Morland's advantage became. The weaker, wilder, more selfish he seemed for pressing it.

Could he really do it? Could he pull the trigger while someone looked him in the eyes, as he stopped, hands still raised? Someone whose only crime was to be as besotted with Fulbeck as himself?

Morland looked down at the floor, let his grip upon the gun slip a tiny amount, “Get out,” he said to the boy, and his voice was thick with shame, “get away.”

And in that instant of weakness, before Ben could move, he felt the pressure of a hand upon his arm. He turned on instinct, his hand coming tight around the pistol-butt, fingers squeezing, shoulder thrown back from the recoil.

One of them screamed. Or perhaps all of them. The blast of powder was so loud, it felt it should have rocked the house to pieces.

He had shot Fulbeck in the chest at point blank range.

Morland put his other hand on the gun, the heat of it nearly burning him. He watched, unable to move, unable to react as Fulbeck toppled backwards, down to the floor.

No more touches from those fine, cool hands, no more sharp kisses, never again to caress that white, flawless skin.

Hands were snatching the revolver from him, throwing it to one side, were pushing past him, but Morland did not move, could not move.

Ben was kneeling over the body, one hand on the wound, the other at Fulbeck's neck, “Julian,” he was whispering, “Julian, it will be well,” and he turned, his eyes wide, his face without expression, his fingers still probing the throat, the neck, “Get me a bandage, sir, a cloth. Please.”

Morland looked at his hands, where the gun had been. His fingers were shaking.

His vision of the whole scene sparkled, the glow of the gas lamps turned to wobbling spears of light. His head was shaking, side to side, without sense.

“I cannot feel a heart. Sir, a bandage. Julian. Breathe, now. You mun not be dead.”

Fulbeck lay full length on the floor at his feet, his nakedness white and without motion as the purple silk pooled out around him. Morland's shoulder hurt from the recoil of the gun, his fingers stung from its slap. Ben was curled over the body.

“Sir, please, you mun help me. Help me lift him, help me -” The boy was sobbing between every word.

“He's dead,” Morland said. He felt nothing, felt an emptiness, a complete lack.

“Oh, God,” said Ben, falling over the body, shaking, “tha've killed him. Julian. Tha've...” He was bent almost double over the corpse, forehead to the floor beside Fulbeck's cheek, his back shaking with sobs. Morland could no longer look at them, closed his eyes on the scene.

His eyes were still closed when the screaming began.

It was not a human noise, rather a wail that ripped through everything of sense and intelligence. It was personhood stripped down to the suffering animal, it was something wrenched apart, a high, terrible sound that fell fast, so fast, to babbling, senseless.

Eyes open, Morland stared. For the image that had closed his eyes upon had been inverted, twisted out of true. For now it was Ben who lay on the ground, his legs and arms still twitching, feet kicking and flinching. Over him there bent a figure loosely draped in purple, all long, bloodless limbs, falling dark hair.

Morland stepped back and his shoes scuffed on the tiles of the floor.

The thing looked up. Its face was a death mask, fixed, white and snarling. The lower half of its jaw, its throat, its chest, were all thick with gore. Teeth – long animal teeth – shone from its open mouth, and its eyes, its eyes were black and bottomless, without a shred of humanity or compassion.

For a moment, they stared at each other with no recognition. Then the creature turned back to its repast.

The fields were dark, the city was dark, and dark the streets. As he ran, he tripped and he rose and ran only to fall again. He ran with bloodied hands and torn clothes, sobbing, ragged and unknowing. Morning found him wandering, lost in familiar streets. He would give no account of himself, and there was no way to understand it, until the body was found in the old manor house outside the city, until the police discovered that Mr Fulbeck had vanished without a trace.

But by then, the country was at war.

Thank you for reading and for supporting Time's Fool

(Endless gratitude to Cat Rocks for her help with Yorkshire dialect. All mistakes and cringeworthy moments are, naturally, my own.)