So, I promised it, and here it is, the first part of Some Chequered Affection. If you've ever wondered why, and what, is said to haunt the creature's house, here the story behind Steven's "average post-Victorian spook".

This story has a different vibe to main novel, being more of a period piece, and with a touch more of the thriller/murder mystery to it than supernatural horror. However, there's still plenty of good, Gothic stuff going on. What's more, the creature as he appears in this story is not the creature from Time's Fool. Nearly a century has passed between the two stories, and people change - yes Spike, even demons.

(Yes, I've been watching season two of Buffy, why do you ask?)

Obviously, considering the genre, it will contains scenes of violence and content of an uncomfortable nature - and this will happen right from the start.

Just as a courtesy, I will be putting a content note for any other obvious triggers in each section, avoiding spoilers as far as possible. If content notes bother you, just ignore the next line. 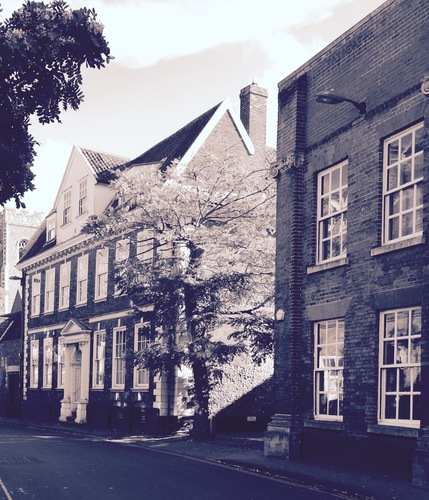 There was a spatter of brown on the wallpaper beside the curtains. It was the very furthest edge of the mess, a stray blot which the mind did not connect with the wall behind Beechworth, or with the thing on the chair in the centre of the room. The curtains themselves hung at half-mast, as though they had been closed by angry, drunken hands. The place reeked: strong spirits, urine, gun powder, the butcher's shop stench of blood. Coming in, Charles Morland had stumbled back, clipping his shoulder against the door-frame, hissing pain through his teeth.

Yet, because he needed his eyes open for what came next, he had focused on that single smudge - it could be a spot of rust, a watermark, anything – and pushed the door closed behind him, hearing the latch click.

“Beechworth,” he said, or tried. He worked his mouth until it was full of spit, until his tongue did not lie dry and useless. “Beechworth.”

The thing in the chair did not respond.

Morland's hands were shaking, his eyes filling up with tears. Beechworth was splayed, his legs apart, arms fallen back, mouth open. Morland had only glanced at him before jerking his gaze away, but it was seared into his memory, a perfect image. He kept his gaze upon the mark on the wall.

Beechworth didn't answer. Of course he didn't. The whole back of his head was missing.

Morland felt a laugh bursting up from his chest. No. He had to be quiet. The servants couldn't be allowed to hear anything yet. Not until he was certain. Morland put his fist in his mouth and bit it, bit down hard until he was in control of himself.

No. There's no need for euphemism, he thought, staring at that brown smear as though it was his salvation, Harry had shot himself. The pistol was lying on the floor by his right hand, next to the shattered whisky tumbler, the dark puddle of liquid spreading underneath the chair.

“Oh Lord,” he whispered around the hard bones of his hand. He could feel the tears burning the skin on his face, making it hot and tight. His nails cut in to his palms.

He knew what he needed to do now, but that meant stepping away from the door, which meant he couldn't look at that spot on the wall any more. Instead, he stared at the floor – the polished oak boards, the deep red of the carpet. He was familiar enough with Beechworth's rooms that he shouldn't have to look where he was going, but horror made his steps shuffle, uncertain. The smell was starting to cloy in his nose, his throat. He felt as though he might be sick and knew he must not. He must not stop moving forward. Morland forced his hand deeper into his mouth, as through the pain would hold back his scream, as though it could block the low, keening sound he began to make.

Morland stepped, stepped again. As he'd walked here in the July sun, his Norfolk jacket had felt too close, too hot, but now his skin felt as though it had been painted with cold and goose-pimples.

Damn it all, Hal. Why do this?

But he knew why.

With an unsure hand, Morland let his fingers brush the table, to feel through the spilled whisky, around the decanter, searching for a slip of paper, a few words of explanation for the butler. Trust Beechworth to time it like this, to wait until both his valet and his parents were away for the night. Always the gentleman to those he loved.

Morland couldn't help a sob from slipping past his lips.

This was no use. He should call for help. Summon a constable. Surely Beechworth deserved better than this? To lie here in his blood and sorrow while Morland, his friend picked around his corpse. Morland closed his eyes and took his fist from his mouth, breathing sharp and shallow. “Sorry, old man,” he made himself say, “But you'd do the same.” Don't speak ill of the dead. “Or it would occur to you, at least.”

He made himself look directly at the body – the ruined face, its jaw a shattered, bloody wreck, the blood on the shirtfront. Beechworth had been half-way through undressing - his collar was open but still in place, his jacket off, his socks slack on his feet. Morland thought of the way they had parted last night: the argument, the angry words.

Six months ago, the pair of them would never had thought of quarrelling. Morland knew exactly who to blame, and wanted to feel a white heat of hatred for that person, for it to wash away all his own sins.

Instead, he felt only a fear which drove him to search the pockets – one by one – of Beechworth's waistcoat, his breeches. It was slow work, feeling around the lumpen weight of the corpse, prying him from the seat, buttoning, unbuttoning, and all the while trying not to disturb the scene.

Harry's eyes stared at him, glassy. Morland could not meet them.

When he had been through every pocket and not found it yet, he knew what he must do. Loathing himself, he pulled open the shirt, sliding his hand down across Beechworth's chest. The skin was cold, clammy - horribly so - but his fingertips reached over that whole, pale chest until they brushed against the sharp edge of the envelope.

He had hidden it against his heart. Beechworth had always been a romantic.

Morland pulled the letter out, folded it without looking and stuffed it in to his own pocket. Whatever happened now, he was safe.

Then, at the last, he reached up his traitor's hands to press his friend's eyelids closed.

So, there's been suicide? But why steal the note? What could it possibly contain? And where is the creature in all this?

I hope you will correct the first word in the second line of text. It should be "farthest," not "furthest." Farther is physical, further is mental.