If you fancy any of these books, when Time’s Fool reaches 25% I’ll be posting one of them to a lucky subscriber. In addition to their choice of the titles below (or an equivalent book token) they’ll also be getting a handwritten letter thanking them for their support. So, if you fancy any of these, spread the word and pledge yourself for your chance to win.

What makes the Gothic? Is it the aesthetic? The setting? The pervasive sense of disturbance and dread? Some gorgeous alchemy that combines the three? Below are my five of my favourite Gothic novels that far too few people have read. I'm avoiding the obvious choices (Dracula, Frankenstein, The Vampire Chronicles) in favour of stuff that is overlooked, under appreciated, and deserves a wider audience. 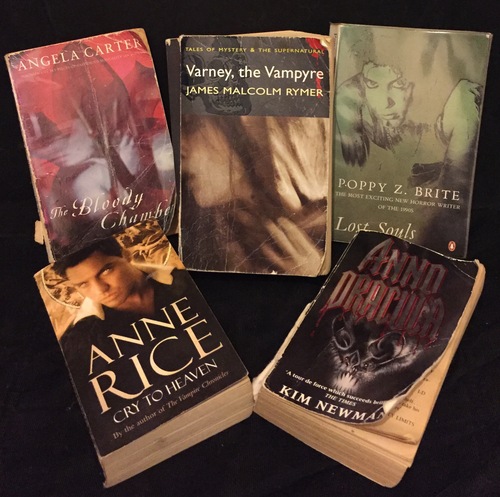 Cry to Heaven by Anne Rice: set in the dark canals of Venice in the 18th Century, this is a story of love, music and revenge. Tonio Treshi, last scion of a noble household, has a soprano voice of such purity that men weep to hear it. But when his disgraced brother, Carlo, returns to Venice it becomes both his curse and his salvation. Written with Rice's trademark lyricism and soul searching, this is a gem of a novel, often overlooked in favour of the further exploits of the Brat Prince. Gender bending, tender and challenging, it looks into the dark glory of all art.

Anno Dracula by Kim Newman: Imagine a Victorian London where Van Helsing had failed to stop Dracula, where the immortal Count has wed the Widow of Windsor and parvenu vampires stalk the smoggy streets of Whitechapel. Imagine a London where Sherlock Holmes is locked up for sedition and the Diogenes Club send their best agent to solve the mystery of Jack the Ripper. Part political satire, part celebration of film and literary culture, Anno Dracula is a joy, a harrowing delight. It is probably my favourite modern vampire novel. I wanted to sell Time’s Fool as ‘the vampire novel by an über fan”, then remembered that Newman pipped me to the post. Read it. And if you’ve read it, read the sequels.

The Bloody Chamber by Angela Carter: When talking about this book, I tend to run out of superlatives. Carter’s reimagining of traditional fairy tales is a thing of wonder. It doesn’t deserve, really, to be on a ‘lesser known’ list, but it will not reach the acclaim it deserves until everyone in the world has read it. Every sentence in this book rings with perfection, every story reaches in to your mind and pulls out all the darkness and complexity there. Glorious, sensual and challenging. The book, Watson.The book.

Varney, The Vampyre by James Malcom Rymer: And from what is probably the best book on the list to what is certainly the worst. If you read this expecting plot, consistent characterisation or even sense, then you are looking in the wrong place. I’ve often been accused of reading ‘Penny Dreadfuls’, but this actually is one. Published in instalments between 1845 and 1847, it runs to slightly over a thousand pages and boasts every literary weakness imaginable, even down to inconsistent chapter numbering. But it belongs on this list as the book which established the vampire (aristocratic, predatory and morally complex) in the English imagination. Almost every trope you know from vampire fiction occurs in these pages and - farcical, inexplicable and downright weird as it might be - it is enormous fun.

So, there they are: my five favourite, lesser known, Gothic novels. Have you read any of them? Am I terminally misguided? Have I missed any absolute masterpieces?

All feedback welcome. Even if you think I’m an idiot.