Sorry for the delayed post - technical issues last week meant I lost a whole ton of work and have spent the intervening time kicking things in frustration.

So, one thing that probably needs to be said is that - although the city in Time’s Fool is Barchester - it’s based very much upon my time in Norwich. Much was it was plotted on late night walks after the UEA library had finally thrown me out, or on my way home from working as a chef.

In the small hours of the morning - especially on a week night - a city presents a very different face to one it wears in day time. Its colours are amber and black, and it’s inhabited by hurried, solitary walkers or roaring black cabs. Walking, I’d cook up snippets of romance and mystery to attach to people and places, and would realise here - no, just there, behind that fence - would be the perfect place to kill someone.

With this in mind,I had the delightful experience of giving a world premiere of chapter twelve to Norwich’s Poetry Collective at the Birdcage Pub not two hundred yards from where it happened.

Anyway, if you were there, I hope you enjoyed your walk home… 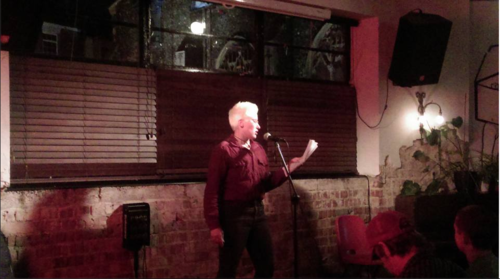 It was really lovely to be able to unleash the creature on an unsuspecting… I mean, it was great to introduce Time’s Fool and the creature to a whole new audience and I thought with that in mind some of you might like to know a little more about him and why I wrote him the way that I did.

Julian was turned in the early part of the 15th Century, and would have been in his twenties when this happened. This makes his roughly a contemporary of the historical Vlad Dracula, but rather a Prince of Wallachia and a player on the international stage, Julian was minor rural gentleman, the grandson of merchants. I made this decision for a couple of reasons.

While I absolutely wanted to echo the backstory of Dracula, the crumbling castles and feudal barbarity which Stoker uses to denote ‘medieval darkness’ don’t exactly present an especially nuanced view of the time period which they represent. Dracula works very much on the dichotomy of ‘inside’ - the safe, modern, bourgeois world of train timetables and phonographs - and the ‘outside’ wildness which threatens it.

But one of the glorious things about living in a relatively well preserved medieval city is the way that history is overlaid again and again. The comforting lines between past and present, safety and violence become blurred: that nice little pub where you had a pint of real ale was where they brought the dying during the battle that ended one of the largest popular uprisings in English history, in which half the city was burned. Your riverside walk takes you past the site where heretics were burned, and the church that was home to a fourteenth century anchorite who preached a doctrine of love, a church that was destroyed by a German bomb in 1942.

I wanted the creature to be as much a part of that city landscape as Sophia and Steven. He is a threat that originates at home, at once exotic and familiar. He comes from a family on the make - an idea still familiar but slightly antiquated - new money buying estates and marrying in to the minor branches of old names. From a practical perspective, this allowed me to give him that classic vampire aura of aristocratic threat (I think 600 years is long enough for new money to become old) but also give him the financial skills to keep himself solvent in the interim. After all, retreating to a mountain fastness and digging up buried treasure isn’t too viable an option in the East Midlands.

We writers do have to think about these things.