If you've wondered exactly what it is I'm wearing around my neck in the promotional video, it's this: 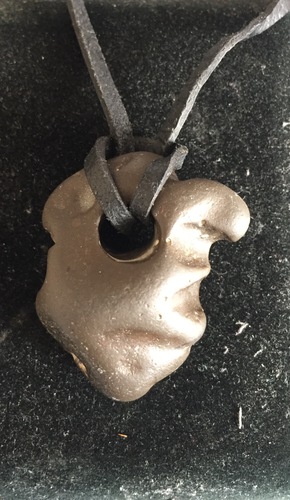 As a lump of rock, it'd be pretty unremarkable, except that the hole at the top is not man-made. Instead, it probably made by a piddock - a shy little bivalve who drills a hole in a stone, then hides in it. (A creature after my own heart.) When the piddock moves on elsewhere (or dies, or is eaten) we're left with a beach pebble with a hole that is almost implausibly round and regular.

I found this particular example in 2013 at Robin Hood's Bay after replicating Mina and Lucy's ramble along the cliff-top in Dracula (if you're thinking about taking your invalid friend along that footpath, it's seven and half miles each way, and steep), and it's one of my best lucky pieces.

Hagstones - stones with natural holes - are a widespread superstition, along with other anomalous finds, like four-leafed clovers. Likewise, bad luck is often invoked by image magic - broken mirrors, photographs laid face down. Other supersitions are more regional. I'm always amazed by the periodic facebook posts telling me that black cats are less likely to be adopted from animal shelters, because where I come from, black cats are lucky. Bats, which we tend to view as spooky harbingers of the supernatural and an ill omen for the houses in which they roost were - in Ancient Peru - symbols of luck and prosperity. Unlike in Japenese or Chinese traditions, Korean martial arts uniforms are black because white is the colour of a shroud.

As a writer who often veers in to folk horror, I'm fascinated by superstition, the way that it underlies every action with a second, symbolic action. Sometimes these are religious, or drawn from folklore, at others they are based upon association of circumstance, or social norms. Is green unlucky because of the arsenic in Scheele’s Greens? Or is it because it is a colour that draws the attention of the fae? Or because a "green gown" was associated with the loss of sexual innocence?

"Who cares?" my Gran might tell you, "It's better to be safe than sorry."

Superstition is a kind of magic whose success relies upon ritual and result, rather than belief or understanding. It is the 'just in case' of the supernatural, a touchstone, a 'well, I'd be more comfortable if...' It feels right, even if there's no measurable effect. It's the suggestion of things done properly, because who knows what might happen if one did not.

In fact, if you look at the ways in which a person can become a vampire, they are often based in that sense of things that are not done quite right: a mother daring to conceive on the same day as the Virgin Mary, a baby born with teeth, a corpse that an animal has been allowed to leap over. Normativity, respect for the way things should be done is what keeps us safe from the unknown.

Of course, there are superstitions in Time's Fool, proper precautions that are not taken. Meanwhile, in the promotional video, I wear my hagstone round my neck, I've got my lucky boots on and my dog-tag in my pocket. It's not that I can't perform without those things, it's just that, well, I'm more comfortable that way.