A quarter of the way there! Prizes, news, sunshine! 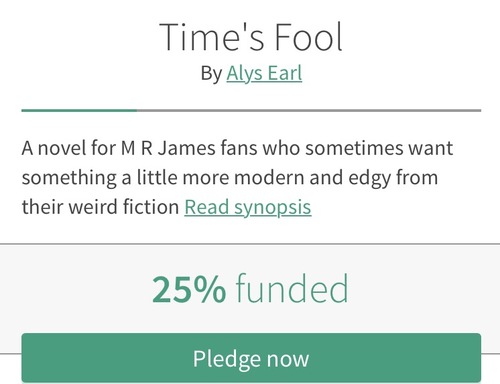 Although apparantly there'll be a cold snap this weekend. So, to announce the winner of the free gothic novel which I promised to give out at 25%, it is *drumroll* Mr IAN GILES who was the ninth person to pledge to Time's Fool.

I will try to contact him directly to see which book he'd prefer, or he can leave a message in the comments - choices are Angela Carter's The Bloody Chamber, Lost Souls by Poppy Z Brite, Anno Dracula by Kim Newman, Cry to Heaven by Anne Rice, and Varney the Vampire by James Malcom Rymer.

If you didn't win, don't worry. I'll certainly be doing another giveaway at some point. What's more, your free download of Vic Hill's illustration of the first chapter will be available to subscribers early next week.

Also, to celebrate, I'm trying to think up some new reward levels - cool, collectable stuff that you won't get anywhere else. What do you want to see? Bookmarks? Cards? I'm going to do some drawings for promotional material and a printable voucher for people who want to gift the novel - so I was wondering if people might like little thank-you cards?

One other thing that occured to me - inspired these alternative scouting badges - was producing a Barchester University degree certificate to celebrate your support, and your expertise in such areas as vampire hunting, necromancy, cryptozoology and psychogeography.