Three In A Bed

A contemporary novel about tabloids, spies and quite a lot of sex 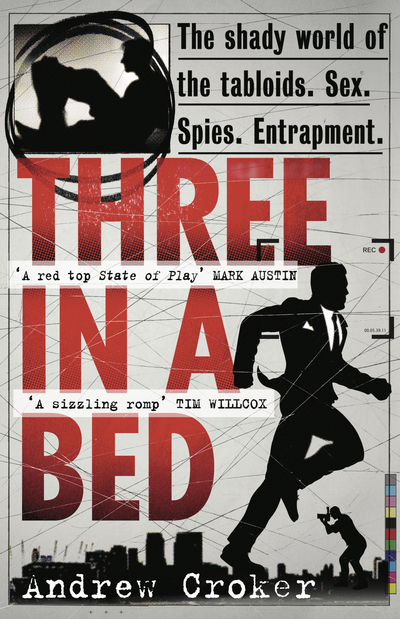 Fiction
You made Three In A Bed a reality. It's available in all good book stores now.
$8
44 pledges

Everything up to the signed book level, plus two tickets to the VIP launch party at Coco de Mer and have a character (or pet) named after you. Limited to 60. NOTE: because the book is in production, only pledges for this level before 20th October will include the character named after you.
$3,000  + shipping

All of the above, but you can be a bent copper or the Head of MI6. Plus a private photo shoot with Swinging London legend John Stoddart. Here’s some of his work “I loved it. It reads like a red top version of State of Play." Mark Austin, ITN


“A story so on the money that if it hasn’t happened already, it will be happening soon. Three in a Bed is a thrilling romp through the unholy trinity of media, police and security services, and the dominance of character assassination in British politics.” Peter Jukes, Author of The Fall of the House of Murdoch


"A page-turner that paints a thoroughly entertaining picture of the competitive, conniving, cantankerous world of newspapers that may soon belong to another age." Paul Kelso, Sky News


Three in a Bed is a contemporary novel about tabloid journalism. There's politics, intrigue, scandal, entrapment, spies, laughs … and sex. In fact, quite a lot of sex.

The story takes place over two weeks in the summer of 2014, just a few days after the hacking trial exposed the seedy underbelly of Fleet Street and we found out who was really to blame. Well sort of.

But ignore the dodgy metaphor. This really is about three in a bed, a sensational full blown juicy political sex scandal.

And forget the Fake Sheikh (as you now can) - Sam Plummer is the undisputed king of the front page Sunday tabloid exposé. But in reality he's bored, on desk bound autopilot for years, reconciled to being too well paid to ever again be a 'proper' journalist. He breaks the story, an increasingly rare real scoop. Then it all goes spectacularly wrong. His life unravels as he's hounded by the media, the tables are turned and he finds himself on the receiving end. He's reluctantly forced into the public eye, the villain of the piece and focus of the media storm, his ambiguous and colourful private life graphically exposed.

He refuses the easy option to go quietly, convinced it's a conspiracy, not his cock-up. In pursuit of the truth he is outwitted by his nemesis and former protégé, a ruthless master of the 'dark arts', but carries on alone, determined to defend his trashed reputation. Sam's investigation unfolds across Europe, and in Spain leads him to 'Britain's Most Wanted Man'. As he digs deeper he realises MI6 has joined the media in their hot pursuit. Out of touch, he makes rookie mistakes, and is frustrated at every turn. He hits rock bottom appearing live on every national TV news bulletin being escorted back through Heathrow in handcuffs by armed police and Britain's top cop.

But the more hopeless, complicated and mad it gets the more he discovers how much he's loving being back in the thick of it. As time runs out he gambles everything on his instinct, his old skills returning. Helped by a motley crew of his few remaining true friends, particularly the women in his life, he fights back and uncovers a far bigger, more explosive story, triggering a national security crisis.

1st edition hardback and the ebook edition
View all 5 rewards