The strange passage of time... 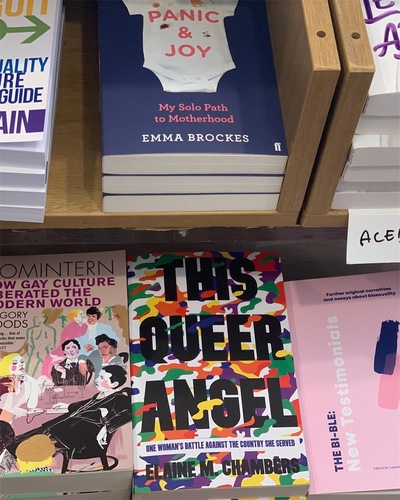 Having waited for what felt like forever, May 7th 2019, World Book Day, saw the publication of my first book! And YOU made this long-held dream a surreal and mildly terrifying truth.

As that day got closer, I began to fret a bit - what if it disappointed everyone? Had I focussed too much on the personal, not enough on the actual history of the ban and its dispatch to the dustbin? What if it doesn’t sell?

The joy of receiving real copies of something I’d written was just indescribable.

Then, on May 24th, the official launch was held at Gay’s The Word bookshop in London. Somewhere with a very special place in both my heart and the story. It starred in the film Pride and I hope one day it may play a key role in a film version of TQA. And yes, I’ve always seen my story in cinematic or televisual terms. Not in a vain way, but simply because I’m a very visual person - if it ever got to that stage, I’d want to either have already written the screenplay or at least be co-writer with whichever established dramatist takes it on - Andrew Davies? Russell T Davies? Emma Thompson?

Yes, my Mittyesque side remains fully functional - but dreams keep me happy and optimistic, despite the chaos and madness at large in the wider world!

So, I’m still trying to get as many reviews as I can - they’re gradually increasing in number. Publicity is always a tough nut to crack, but Rosie Wilby of Piranha PR is on the lookout for me - if anyone knows any big cheeses on TV, radio, newspapers, magazines - please get in touch!

Meanwhile, PLEASE do post reviews on Amazon, Goodreads anywhere really. Apparently, once you pass 50 reviews on Amazon, it can make a difference to sales. I’ll find out at the end of October how well/badly it’s been selling, so I have my fingers crossed that it’s doing okay. But please keep on letting people know about it and encourage them to buy their own rather than borrowing yours!

Once again, a mahoosive THANK YOU from one very happy AUTHOR! (I’ll never tire of that!)

1st edition paperback, ebook edition and your name in the front of the book as a super patron.