Your father never called me from Heaven

It's 36°C (96°F), but my weather app says it "feels like" 44°C (111°F). I have a sweat tear dribbling down my cheek, but I refuse to go inside. I'm on a rooftop in Bangkok, and tomorrow I'll be heading back to Gloucestershire where the temperature is nine times lower. If I'm going to update you on the latest festival for the dead in THIS PARTY'S DEAD, I'm going to do it up here: 50 floors up in a glorious, simmering hot cloud of pollution, the heart-blocking puff of smog that cities radiate, the smallprint of excitement.

Deathtival four of seven: Cheng Meng, a Chinese festival for the dead. The original plan was to go to China or Hong Kong. Then I realised that this is the very festival my stepmother X (pronounced 'eck') celebrates every year. She's Thai, Cambodian and Chinese. She and my Dad have been married for 20 years, and live in Korat in northeast Thailand. Rather than take you through the whole festival, here are a couple of moments:

Phuang Malai
We're waiting for the lights to change. Outside, a street seller walks between cars. He's completely covered to protect from the sun, and his hands are strung with phuang malai - floral garlands for luck, marigolds above and below a column of jasmine buds, hung on a yellow ribbon. X rolls down her window and calls him over, and he says, "Yī̀s̄ib bāth".

"Do you have 20 baht?" she asks my Dad. He hands her some coins. Her mother, Mae, is in the front seat and takes down the old phuang malai hanging from the rearview mirror, its petals limp and browning at the edges, and X hangs the new one as the lights turn green.

"We won't have an accident, now," says Dad, "Buddha will protect us." He's an atheist, but the beauty does the car no harm. And somewhere beneath our layers of thoughts and actions, every veer away from a ledge, every squeeze of a loved one's hand, we're all saying the same prayer: not me, not today, if you don't mind.

This one just has petals. 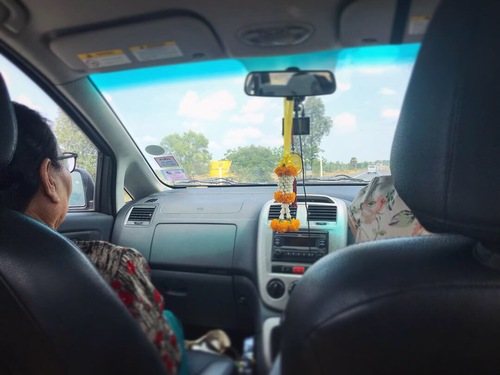 "Your father never called me from Heaven"
Cheng Meng (or Qing Ming in China), is a festival for families. They visit a loved one's grave – perhaps more than one – lay out food and drink, light candles and pray for the dead's happiness, wherever they may be. They also bring gifts, and how to you deliver gifts to the dead? Via fire.

Burning paper notes and coins will mean your dead have money, which may be useful for bribing Heaven's 'ghost-officials' (a famous Chinese studies academic once commented that, "Only the Chinese would conceive of the afterlife as a giant bureaucracy.") In recent years, people have branched out when it comes to gifts for the dead – paper iPads, paper cars, paper clawfoot baths, even enormous paper mansions that cost hundreds and are reduced to ashes in minutes.

A few years ago, X and Mae burned a paper mobile phone for the first time. Some weeks later, Mae said, quite upset, “Your father never called me from Heaven.”

“Oh no!" said X, "it must be because we forgot to burn him a charger!”

X's brother Ar climbed up to the top point of the grave and hung streamers, as his daughter Fern (my step-cousin? Is that a thing?) lit candles and incense, and laid out fruit and paper gifts to burn. As well as the traditional paper money and gold bars, X brought paper suits, ties, shoes, fancy watches and iPhones.

Everyone burst out laughing, including Mae.

I think she’s still secretly hoping for a call.

The next stop is Kyoto, Japan for the Obon festival. From there I'll fly to Tana Toraja in Indonesia for Ma'nene, and just a couple of weeks later I'll go to Madagascar for Famadihana, or The Turning of the Bones. I've left the two that involve real dead bodies until last...

Thanks SO MUCH to those of you who have already ordered the book. It's just hit 57%, so it would be amazing if you could share this with anyone you think might be interested.

Those of you who've messaged me to say you're regretting not going for the Biscotti Edition, did you know you can very easily upgrade your pledge?! I have 18 batches to bake already so what's a few more?

I'm now going to go back down to the ground for one last evening with my husband Dion before the flight home tomorrow. It's a 13 hour flight, and here's a fun fact about me: I actually hate travelling.

Have a lovely day. Take care of yourself, and somebody else.

erica, i've been loving these updates, but today is something different. learning that you don't enjoy the actual travelling bit makes me see just how passionate you are about experiencing and reporting on these amazing festivals, and i, for one, thank you for enduring the parts that aren't so cool (unintended joke, but i'll take it. those temperatures are hellish!!) so looking forward to getting my hands on the completed book!!