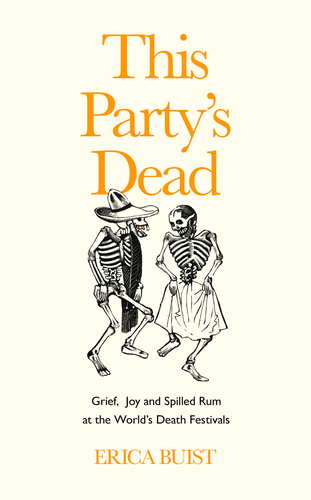 I am excited to say I've just been sent the cover design for This Party's Dead, and I wanted you early pre-orderers to be the first to see it.

The cartoon is the work of Mexican cartoonist José Guadalupe Posada. He was the first to draw skeletons wearing clothes and partying, and later Diego Rivera started using the image in his murals, which led to the sugar skull image we're all so familiar with today. José Guadalupe Posada is actually mentioned in the book – which, delightfully, the designer didn't even realise.

An update on the manuscript: the copy edit is done, and the book is on track to be sent to the printers in October and published in February (yes, printing takes four months. I'm pretty sure a team of monks could hand-write it in that time, so I'm going to pretend that's what's happening).

I hope you're all keeping well, and thank you again for pre-ordering This Party's Dead. If you think anyone else you know would like it then do share – but maybe nudge them away from The Biscotti Edition because almost 60 of you maniacs have ordered it. My flat is going to look like an actual bakery in February. The few of you who know me personally, if you're in Crouch End around that time, do drop by. There will be offcuts.