There are no death festivals in winter. Off-season's greetings!

Can you imagine how terrifying autumn must have been to early man, seeing as God has apparently decided he's done and that everything can just die now? No wonder that period is packed with death festivals, they were probably bargaining not to be next. What I'm saying is: as far as I know, there are no death festivals in winter. I guess no one ever thought to have once since by that point everything is already dead. Sure, in autumn when death is clearly winning the game you might turn up to cheer it on, but no one screams for the winner once the game is over.

So, ladies and gents, welcome to death festival off-season.

So what will I be doing in the months between now and April, when the festivals start up again?

First of all I’ll be writing up the death festival in Sicily, from which I’ve just returned with a blood sugar level that is mainly 60/40 in favour of sugar. Cut me open and I bleed syrup. (NB. Please don’t cut me open, that’s the opposite of what I want.)

The Festa dei Morti itself is for children: much like Christmas, children get gifts, except they’re not from Santa Claus but their dead relatives, and they’re hidden around the house so the children have to hunt for them. The idea is to form bonds between children and the dead relatives they may otherwise forget, and to create an association that isn't based in fear and sadness. I wish I’d grown up associating my dead relatives with an exciting treasure hunt instead of sombre, awkward silences.

I’ve attached a short video of my favourite of the monologues (subtitled by me, hopefully well), given in a Palermo cemetery by actor and writer Sandro Dieli about his memories of one of the Feste dei Morti of his childhood.

I'll also be practising the recipe for Ossa dei Morti, the traditional Sicilian "bones of the dead". There have now been 15 orders of the Biscotti Edition, so I learned how to make them in Sicily. Unfortunately, my host had her oven on the grill setting, so, well, here's what they should have looked like versus what they did look like... 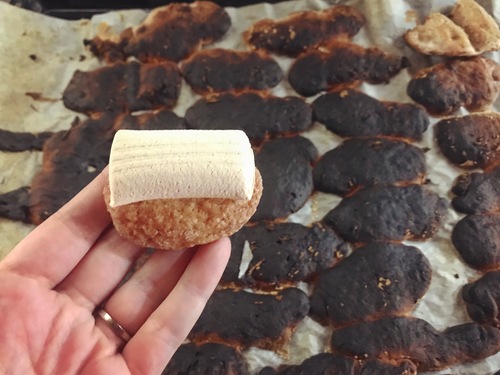 (We did NOT nail it...so you can see why I'll be practising this winter)

I’ll also be arranging next years’ festivals: Qingming at my dad’s house in Thailand, which I’ll celebrate with my Chinese stepmother and step-grandmother; Obon in Japan; Ma’nene Indonesia (both in August, very handy) and the Turning of the Bones in Madagascar in September.

At some point I plan to do a subscribers-only update with some sneak peaks at some never-before-seen excerpts. Just for YOU, subscribers! (Not a subscriber? Pledge here.)

***BIRTHDAY ALERT!***
It’s my birthday this month. Your gift to me can be getting someone else to pledge. It’s only fair because you didn’t get me ANYTHING last year, and I didn’t say anything, because we don’t necessarily know each other, but still. Here’s your chance to make it right. We can totally get past this.

Thanks for reading as always, and have a lovely November.

Great post. I love the sweetmeats idea. As I mentioned when we met, in the Catholic tradition, the whole of November is given over to the dead. So no death festivals but a month honouring the dead. We write the names of the dead in our remembrance book and light candles. I always do it, but haven't managed to get to church yet this month...Oops.