I am so on theme with my non-round-numbers roundup. It's day 201 of crowdfunding THIS PARTY'S DEAD, I have 179 backers and the funding is at 34%. All horrible uneven numbers. In case the title and the enormous video at the top weren't clear, this update will be about my upcoming trip to Palermo, Sicily. On Sunday I will once again be leaving my dog (and husband) for a death festival, this time in my home continent of Europe.

La Festa dei Morti is celebrated with Ognissanti, or All Saints Day, and is the only death festival I could find in Europe that hasn't been directly imported from elsewhere - sure, there are pockets of Asian communities who celebrate the Hungry Ghost Festival and you'll always see a Catrina or two on Mexico's Day of the Dead, but Palermo's day of the dead is its own. 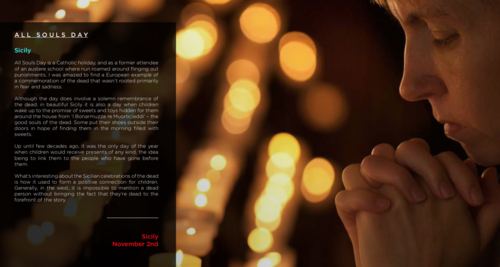 What attracted me to Sicily was a particular old tradition that is currently being revived: parents hide sweets and candy for children in their shoes, and tell them they were placed there by "the good souls of the dead". Up until a few decades ago, it was the only time of year children received gifts. I don't know how you were brought up, but in my house if you mentioned someone dead you were obliged to go silent, look down, and after an appropriately-lengthed pause say, "Very sad" before awkwardly changing the subject. Nothing rams home the idea in a child's mind that death is an abomination as subtly or consistently as an awkward silence. Particularly galling is the idea that your absense is the only thing anyone ever cares to mention about you; you spend decades accumulating values and achievements and memories, and yet the fact you're not in the room becomes the linchpin of your legacy. Bleak.

If we'd grown up associating dead people with a sugar rush, maybe we wouldn't be such ninnies about the whole concept. I don't know. I'll see what I can find out. How will I be doing that? Well, in the mornings I'll be taking Italian lessons, so when I interview and chat to people in Italian I'll be able to understand them (I learned from people from Milan and Verona, so this is the Italian equivalent of learning English in Mayfair then popping to Glasgow...I forsee no issues).

I will also be tracking down someone who can teach me to make Bones of the Dead biscotti for the 11 of you who have ordered the Biscotti Edition. I could totally just ask the internet, but if I'm going to ask you to munch on bones while you read the book, let's make them authentic bones.

IN OTHER NEWS: I was recently a guest on another podcast: Death by Design, and was interviewed by the wonderful Kimberly C. Paul (check out her TED talk). We talked about grief, my book and Trump/ Brexit solidarity between our two great/ disastrous nations. Listen here. And if you're still thinking of pledging but haven't, use the promo code deathbydesign to get 10% off.

It's an offer you can't refuse (I'M SORRY, I HAD TO - and I'd like to point out now that I do not mean I will murder you if you don't make use of this promo code. It is in fact an offer you can very easily refuse).

That's all from me; I have to pack for the last death festival of the season. As always, thanks so much to my supporters and if you or someone else is thinking of pledging, then please do you marvelous beauty - it's all about that delicious momentum.