This Is Not About You

A memoir about dating and romance, or lack thereof – from one terrible man to the next

At the age of 26, I had a six-month affair with a married man.

We met at work and became close friends. It’s hard to look back and see the truth of why that was, what we had in common. It would be easier to say we became friends because we were falling for one another, and friendship was the door that led me to the best — and worst — six months of my life. But that wasn’t it.

Before the first night we kissed and went home together and had terrible drunk sex — sex that was not worth the strife or the guilt or the embarrassment — I can say, hand on heart, I had never thought about being with him. He was married, more or less happily, as far as I knew, and I was not the type of girl to sleep with a married man.

In a way, the affair marked a split in my sense of self — or, at the very least, in how I viewed the world. Before, I thought there were two types of women: those who had affairs — desperate, lonely, pathetic women — and those who didn’t. I placed myself firmly in the second category.

For the six months we were seeing each other, I believed in pretty much the same basic structure, but with one significant difference: I had moved from the second category to the first and was, therefore, desperate, lonely, and pathetic. But I now know that women who have affairs can be pathetic and desperate, self-respecting, careless with their bodies and feelings, or all (or none) of the above. There is no common denominator.

No relationship in my life has made me feel more alone than this one. It took over my life. It eclipsed all others.

I became, for the first time, a liar. It wasn’t so much compulsive as necessary. I lied to everyone about everything — about who I’d had lunch with, about where I was going that evening, about whether I was single (was I?), about what I’d be doing this weekend or the next.

He would come over and I would put my phone on flight mode and tell my friends I was out with other friends or at the movies or a concert (and hope they’d never ask for details). We’d eat takeout and have sex, and later — but never too late — he’d get up and get dressed and go home. I would tidy up, removing the takeout containers and the condoms and folding the blanket we’d been lying under while on the couch. I’d reactivate my network and wait for a flurry of texts. The silence would always be ever-so-slightly disappointing. I’d told them I was busy, but it still rankled. I felt like Lucy in The Lion, the Witch and the Wardrobe, escaping my everyday life and stepping into a kind of fairy tale, but I had no one to confide in.

I was someone who would call friends and give them a blow-by-blow account of my day or night. I would tell them the details of my other friendships and my work relationships and talk about what book I was reading and what film I had seen. I spared no details in my confessional chats.

During the affair, there was no point in calling anyone. I couldn’t tell them about my life. What would I have to talk about? Discussing made-up events is incredibly boring for everyone involved. If I couldn’t talk about him, I had nothing to talk about. He was all I wanted to talk about, so he became the only person I spoke to.

It didn’t occur to me at the time, because it felt like we were both in this relationship we’d made in my house, but I was the only one who was truly alone. He had his family and his friends and a life with his wife. I had pulled away from friends and family so that I could protect my secret, while he had to stay close to his for the exact same reason. In my isolation, I needed him. I think he liked it that way.

I tried to end it a couple of times, halfheartedly, like I tried to quit smoking. I knew it was bad for me. I knew it wouldn’t end well. I knew I’d be better off without him and that he needed space to deal with was going on in his life. He wasn’t sleeping; he had chronic back pain; he’d had a headache for weeks. His body was, I thought, manifesting the symptoms of his guilt.

I wasn’t feeling guilty. I’ve always thought the married party should feel the guilt, and any shame is theirs alone. I do feel ashamed, now — less because he was married and more because, with the benefit of hindsight, my motivations are so transparent. I was incredibly flattered that someone like him — someone older, smarter, someone more popular and better known and more sociable and ultimately better than me — would risk disrupting his life. For me. At the time, it felt like a compliment. I drank it up.

He ended our affair in the snow. We had gone to a bar for a few drinks one weekday evening. We could do that because before all this happened, we had been friends. His wife, he told me, wanted me to come over for dinner. I imagined the conversation. “It sounds like you’re really friendly with Rosemary — why don’t you invite her over? Is she seeing anyone? Maybe she could bring him.”

After we’d finished our last drink, we walked the three blocks to my house. The snow had been falling for days; as it melted and refroze, my kitchen ceiling had started to leak, a slow drip of ice-cold water coming through the flat roof.

People had tried to tidy up the streets, but they didn’t know quite how. We don’t have snowplows in Ireland, and in their absence there was some disorganised shovelling that left enormous mounds of dirty snow piled at regular intervals on the sidewalk. They looked like giant snowmen who’d started to thaw and then frozen once more, having lost all shape and appearance of life.

He stopped on the corner and told me it had to end. It was bad for him. It wouldn’t end well. He needed to sort out his life and his marriage and go home. I think I laughed. We’d had this conversation before, but the other way around, and he’d always talked me out of it. “I know it has to end,” he’d say. “But we’re having too much fun — it can’t end now.” I was easily convinced.

I thought we were just switching roles. I was to take the reins, to deny him his moment of righteousness. It was important he felt like he was trying to do the right thing. But it couldn’t end; we were having too much fun.

I probably told him not to be ridiculous. “Come on, just come home with me and we’ll talk.” But whatever had happened, whoever’s advice he’d finally decided to heed (his own?), his mind was made up. He left me on the corner and I walked through the snow to the house where I lived alone — largely because I hadn’t wanted to take my married man home to my housemates — to my two cats, who would soon disappear forever (but not before consuming an entire parakeet on the living room floor), and to my phone, which showed no messages or missed calls.

I’m not sure how long it took him to sort out his life — a few weeks, perhaps a few months, definitely less than a year. He left his wife, just like he said he would. He moved out, just like he said he would. He moved in with his new girlfriend (just like I hoped he would — although, of course, he moved in with the wrong girlfriend). They adopted a little terrier with a bad hind leg, and a year later they welcomed a daughter named Emily.

I know all these things from social media, and friends of friends, and nights out with people who know me and know him but don’t know us, and thus feel he is the common thread to stitch our conversations together.

As for the two of us, we were never really friends after that night in the snow. In the immediate aftermath, I struggled massively with my mental health. I don’t want to assign blame because I’ve endured such events — long months of sadness and low mood and lack of motivation — since then. I had endured them before him, too. But it turned out he didn’t really want to be my friend if we weren’t having fun, and I didn’t really know how to have fun with him if we weren’t together.

It’s as if none of it ever happened. I put on the fur coat and went through the wardrobe and was back in a flash, a little wiser and a little lonelier and, for the first time in my life, hating the snow.

In Loving Memory of...

Tell Rosemary about your ex (in 50 words or less)and she'll write you an 'In Loving Memory' card that will make you very glad that they're just a memory! Plus a signed first edition hardback, eBook and your name in the back of the book.

Ebook plus your name printed in the back. 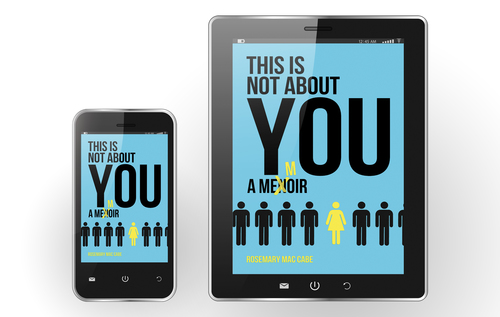