That Time When I Was Made Of Chocolate

And so, here it is, evidence of that time I dressed up as a bar of chocolate for money: 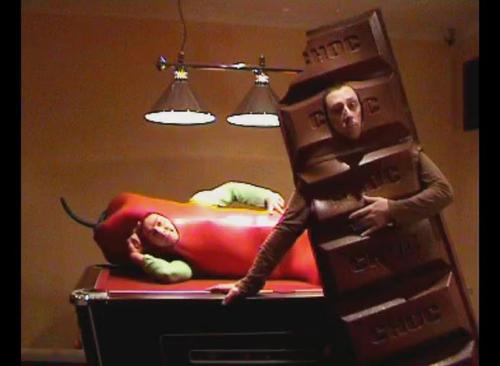 It was for website content for Walkers Crisps' campaign to find a new flavour. There were many contenders put to the public vote: Builder's Breakfast, Fish & Chips, Cajun Squirrel, Onion Bhaji, Crispy Duck & Hoisin and Chilli & Chocolate. Myself and the chap lounging seductively on the pool table were, of course, to represent Chilli & Chocolate.

We all filmed little bits to be animated on the website, with Gary Lineker in the foreground and us capering about foolishly behind him. My memory of Mr. Lineker was that he seemed far from happy to be there, no doubt being paid thousands, to hawk deep fried potato snacks.

For our little routine the chilli and I barked "Chilli! Choc! Chilli! Choc! Where sweet meets heat!" -a ditty that was available to download for your mobile, and which remains my wife's text message alert to this day. We then, if memory serves, high-fived and finally, in a ill-advised moment of physicality (suggested by Mr. Chilli -he was a street dancer I believe) we did a 'chest-bump'.

Now he, being somewhat more athletic than I, really went for this last move and, while Mr. Lineker manufactured his enthusiasm for shaved spud selling, we bumped and I took flight, catapulted backwards through the air (you'll believe a chocolate bar can fly!) and duly cracked the back of my head hard on the concrete floor. Mr. Lineker, oblivious, finished his piece to camera and then, noticing the concerned look on the production crew, turned and saw what had happened.

"O for fuck's sake," he exclaimed with all the compassion and empathy we've come to expect from a millionaire made rich by kicking a pig's bladder around a field.

However, fear not dear reader, I did not die that day, no, I was picked up, dusted off and we went again, and again, until we got it right, or until Mr. Lineker indicated that he'd rather die than do another take (or made it clear that champagne and caviar were waiting for him at some exclusive location).

If you've enjoyed this story and haven't pledged for The Dutch Wives then shame on you, you have effectively stolen that enjoyment and must now pledge at once! If you enjoyed it and have pledge then, thank you again, but we still need the word spread far and wide!

A paperback edition and ebook