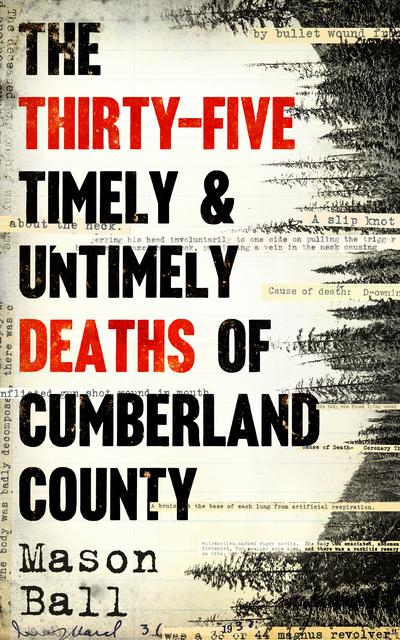 John M. Bischoffberger is a Pennsylvanian doctor adrift in the relative wilds of Maine during the dying years of the great depression. Struggling with a loss of religious faith and retreating from painful memories of The Great War, John has married and set up practice in the town of Naples.

As Medical Examiner for Cumberland County, it is also John's job to investigate deaths that occur under unusual or suspicious circumstances. Yet as he goes about his work, he begins to suspect that the deaths he is called upon to document are in fact far from routine.

Against his better judgement, he becomes convinced that an uneasy alliance of three itinerants is going about the county, killing. An old woman, a little girl and a thin man are fulfilling some strange and unspoken duty, drowning, suffocating, hanging and the like, men, women and children; each of the three harbouring a profound distrust of the other two, yet still this queer confederacy press on with their murderous work.

John confides in local outsider Joseph, an older man who becomes John's only outlet for his impossible fears. All the while the three continue to kill, and the deaths seem to be drawing closer to John: others who may suspect foul play, then acquaintances of John, then perhaps friends, even family members.

As the storm clouds of a new world war gather in Europe, and John's rationality slowly unravels, he must find a way to disprove what he has reluctantly come to believe, or to confirm his worst fears and take steps to end the killing spree of the three in the woods, whatever the cost.

With a narrative switching between the doctor and the trio of murderers, and inspired by, and including, genuine accounts made by the real Dr. John M. Bischoffberger in his medical journal between 1934 and 1941, The Dutch Wives weaves about them a fictional and dreamlike story of faith, community, and how we deal with life in the shadow of mortality.