A memoir of misdaventures in 90s Ibiza. 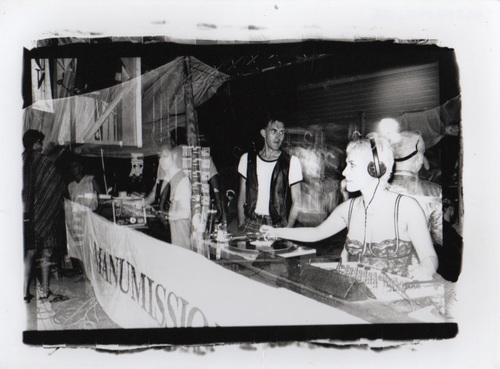 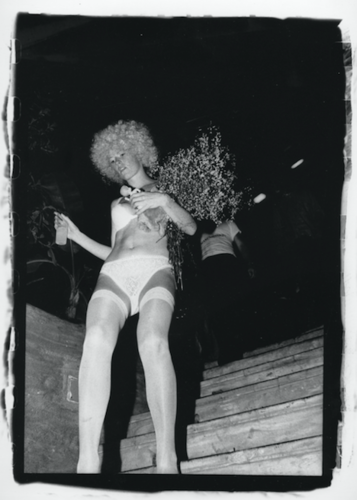 The digital collection. Take 'The Motel' state of mind with you everywhere - a beautifully designed ebook. 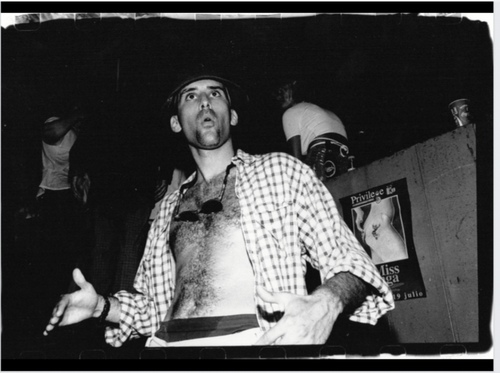 Limited first edition hardback with photographs, design notes, and illustrations. As well as Claire's personal account of life at the helm with Mike the memoir will also contain anecdotes from some of nightlifes most iconic figures who joined them under the Motel roof! 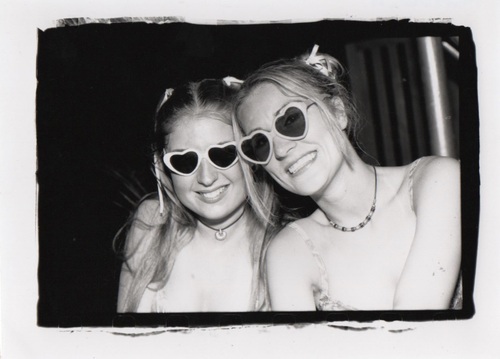 WALL OF NO SHAME

Two signed first edition hardbacks and your choice of two names to be added to the CAST OF CHARACTERS.

Hotel Level. Your venue will be listed on the prestigious hospitality page at the front of the book. This super patron pledge includes 10 first edition hardbacks and an opportunity to host a Motel Revue event in your venue (details to be mutually agreed upon). 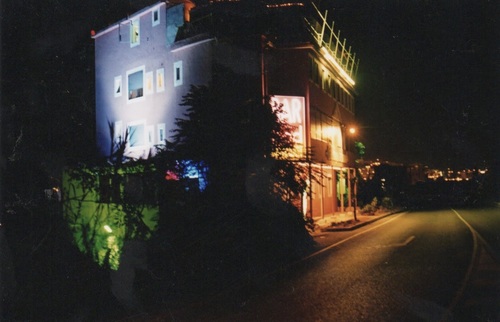 You will be listed in the credits as EXECUTIVE PRODUCER at the front of the book, there will be a character named after you in the book, you will receive an early copy of the manuscript with a selection of original artwork from M&C’s private collection. A signed first edition hardback and a bespoke edit of certain scenes from Manumission The Movie will complete your pledge and status as a major Motel player. 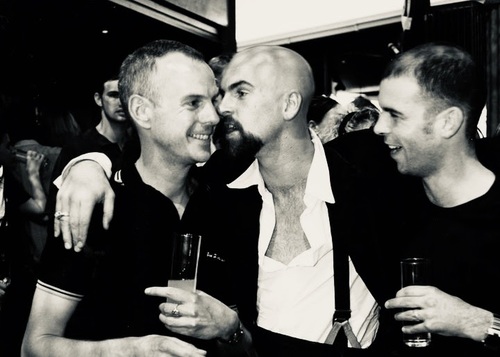 Your name and logo will be listed at the very front of the book on your own page. You will be The Motel Sugar-Mumma, or Sugar-Daddy immortalized for all time in this classic book. Plus ten signed first edition hardback copies of the book, a collection of original artwork from M&C’s private collection. Plus a digital artwork collage designed by M&C. Together we will design you your own Ibiza style nickname, and you will feature in a key moment in The Motel book. Plus a selection of secret stories with bespoke illustrations by M&C. And VIP entrance to an M&C curated event worldwide, with access to join them on the captain's table. 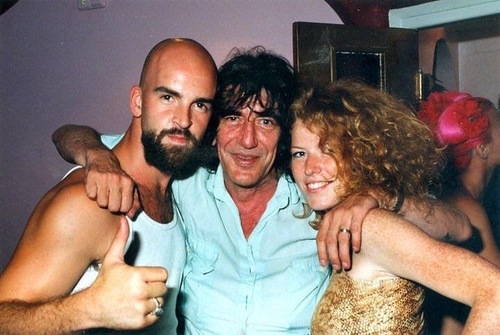 LIMITED TO 5 COPIES. A signed hardback that contain annoations, notes and illustrations handwritten and drawn by Mike. These will give his own unique observations on the stories contained in the book. Plus your name listed in the back and the ebook. 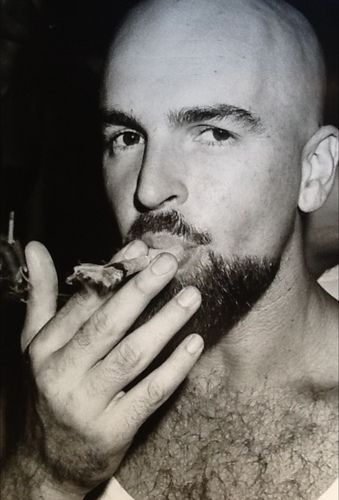 SOLD OUT. Be forever remembered as a part Ibiza history. Signed first edition hardback plus your name in the supporters list under the prestigious banner IBIZA POSSE - as conjured up by Vaughan Afrika! 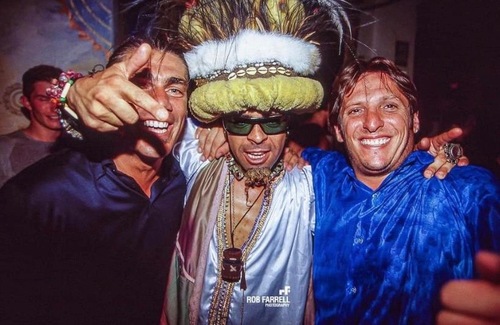 The Motel is a love letter to a lost paradise - Ibiza in the 90s. It's a celebration of all those people from around the world who came to a small Mediterranean island and became part of the swashbuckling adventure that was Manumission.

In 1998, with Manumission going into its 5th year, Mike and Claire borrowed a large amount of money from an armed German cocaine dealer and against all odds took over an abandoned brothel on the outskirts of Ibiza town and turned it into a 24-hour party destination – the most notorious venue of the decade - The Motel.

"The Motel was a pink abandoned roadside brothel Mike and I acquired in the summer of 1998. We lived there with a team of NYC strippers, a sex performer from New Orleans, a flow of international DJs and a bad tempered Irish dwarf who guarded the door from members of the Hells Angels and the press whilst opening it for the best of the gay scene, tattooed Tahitians in dirty blue jeans, ex-cons and outlaws, porn stars, drag queens, film directors and the international set - the counterculture who lived on Salinas beach all day and partied all night, all summer long - the faces, the scene, the friends we hung out with; the people we called 'the island'.”

Under the neon glare of a sign that promised Bar, Bed and Breakfast for one lost summer, this doll's house on acid became Mike and Claire’s home. . .

What could possibly go wrong?

This is the story of the Motel but it’s also the story of Manumission. Over its 14-year history, over 1.5 million people attended the club, it was the biggest weekly party in the world earning it a place in the Guinness World Records. On the dancefloor young ravers rubbed shoulders with supermodels, rock stars, fashion designers, drug dealers, and the sporting elite -  sharing a universal feeling of ecstasy - with zero violence - everyone partying in complete harmony.

With much of club culture currently under the spell of VIP service, corporate sponsoring and branding, The Motel is a timely reminder that life wasn't always that way.

“During the second mother-of-all-lock ins (the first being in the Motel, the second being the fuck up of the 2020s lock down) banished from the physical realm of nightlife aided and abetted by our extensive archive we took the painful, shocking, hilarious, embarrassing! - 'let's go for a walk in the garden to get some fresh air... did we really do that!?!?' - trip back to the memory Motel.

The result is a memoir that takes a heady and honest look back at a time that no longer exists and perhaps provides an answer to the question, 'what happens when you say yes to everything?...'

The story draws from all my years in Ibiza, weaves back and forward through time: from the carefree early days when I met and fell in love with Mike - on his quest for universal freedom - how together we transformed Manumission into the biggest weekly party in the world, the sex shows, the controversy, betrayals and finally the abolition of Manumission but it’s told predominantly from The Motel, on the long wild weekend of my 24th birthday – the weekend when Norman Cook met Zoe Ball and Lisa I’Anson missed her Radio 1 broadcast and was subsequently very publicly fired on the BBC News at Six. The Motel is a darkly humorous look at hedonism in drug-kissed 90s Ibiza."

“The Motel is a classic counter-culture memoir in the same spirit as Howard Marks’s Mr Nice (no surprise that Howard was a regular at the Motel). A group of extraordinary people collected around Mike and Claire at the Motel, it was a 90s Mediterranean version of Warhol’s Factory or Ken Kesey’s Magic Bus. Mike and Claire consistently took creative risks that no-one else at the time was doing whether it was making a feature film or opening the Motel, championing sexual diversity, or having a giant blown up image of Noam Chomsky on the wall (something you would never have seen at the Ministry of Sound!)."

The front cover image of Claire at the Motel is by kind permission of the photographer Franck Sauvaire. 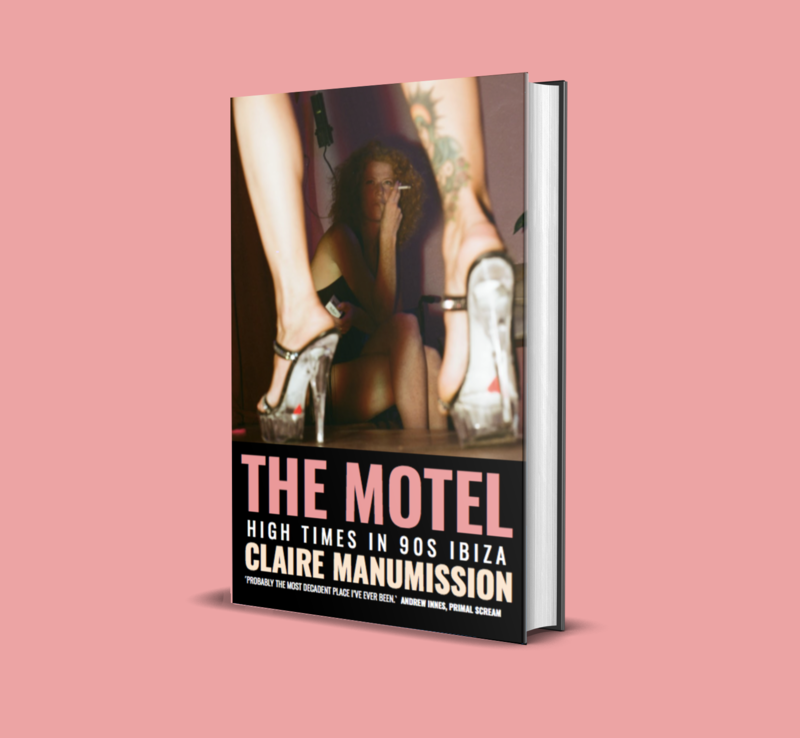 Pre-order this reward
View all 10 rewards