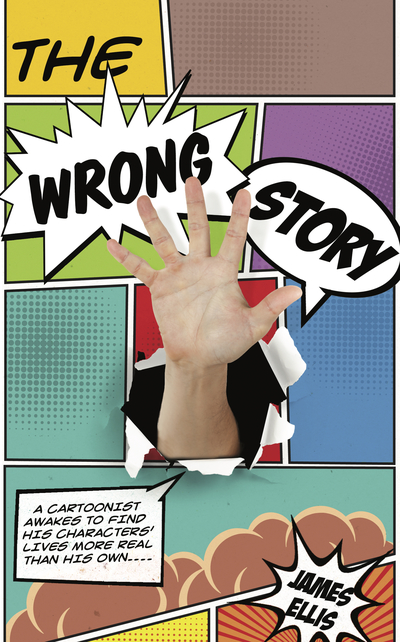 Fiction | Humour
You made The Wrong Story a reality. It's available in all good book stores now.
$7
57 pledges

Lunch with the author, a copy of the ebook edition, and your name in list of Super Patrons in the front.

The Wrong Story is about a cartoonist who falls from a car-park roof and is left with partial amnesia. The novel describes his attempts to work out what happened to him - did he fall, was he pushed, or did he jump?

Haunted by the howls of a distant dog and with his life dissected by reporters, social media and academia, his journey is hampered by a growing inability to distinguish between real and imaginary events. The characters from his cartoon strip, Scraps, assume a separate, grimy reality as they also try to makes sense of their situation; while the lives of his friends and family appear ever more unreal.

This novel is about the desire for self-determination and the obligations on a responsible creator. It is about maintaining a link between who we were and who we are. It is about those moments in which reality and imagination are indistinguishable.

But mostly it is about a man with a big moustache who falls from a roof and wakes to find that he is in The Wrong Story.

“… the decisions you make and the turns you take, well, that’s going to be your story, laid out like a trail for all to see. So make it a good one. Make it the right one ...” (Tom Hannah)

“… [he] expunges the reality of our world and creates a clean, minimal, sanitised canvas on which his characters can thrive - Plenty the Cat, Billy the Hedgehog, the Pelican, the always-angry restaurant owner and, of course, Scraps himself … They are pure, defined, untouchable, immortal. The art lies in what we don’t see: in the spaces that surround the characters; in their world beyond the frames …” (Germaine Kiercke)