New mushroom ideas, strange vegetables, foraging in the garden and beyond

The Three Sisters Recipe and 90%

To celebrate reaching 90%, here is a piece on The Three Sisters with a recipe 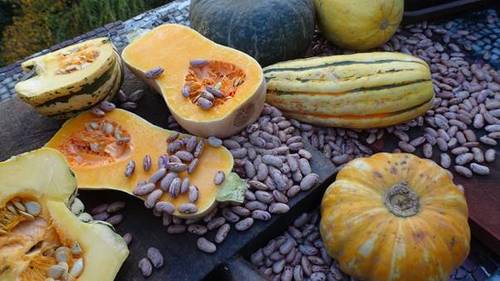 The ‘Three Sisters’ method of early agriculture was used by many of the native tribes of North America. Especially in the south west but also notably also by the Iroquois and the Mississippi tribes north as far north as Illinois. The principal element is Maize which was original domesticated in southern Mexico around the Oaxaca area, 9,000 years ago. About 3,000 years later there is evidence of the cultivation of varieties of beans, the common bean Phaseolus vulgaris and a drought resistant species Phaseolus acutifolius, nowadays pinto beans are the popular Mexican choice. The third of the three sisters is winter squash first known from central America, it was rapidly taken up by the tribes of Central and North America, the majority of the many varieties are based on the species Cucurbita maxima and Cucurbita moschata, the later seems to have been the first species cultivated dating back over 5,000 years.

The Three Sisters were grown on shallow soil mounds, the maize planted first to provide an upright structure for the second plant the beans to climb. Followed thirdly, by surrounding the base with squash which grows very fast and quickly provides shade to cut down the water evaporation from summer sunlight. The raising the soil into shallow mounds allows the rain water to settle at the lower edges of the mounds thus ensuring plenty of water for the squash but keeping the maize and beans in the better drained soil of the mound. The soil is kept fertile by the nitrogen fixing ability of the beans.

Cut acorn squash in half, bake face down or covered in a hot oven until soft (about 1 hour). Divide the maple syrup, nuts, & berries between the 2 halves & serve.