When authors publish extracts they are often taken from early on in the book, as I did previously, but this time I thought I’d find something further on, when the plot was starting to darken – and thicken. At the same time I wanted to dispel the common myth that archaeology is just about digging and finding things. It isn’t: most of a professional archaeologist’s time is spent on the phone, filling-in grant application forms, talking to specialists or writing reports. This extract, which starts a new Chapter, is based on many such conversations I’ve had with specialists. And like one or two I’ve had, it takes place early in the morning and Alan has a slight hang-over. Sound familiar? Now read on… 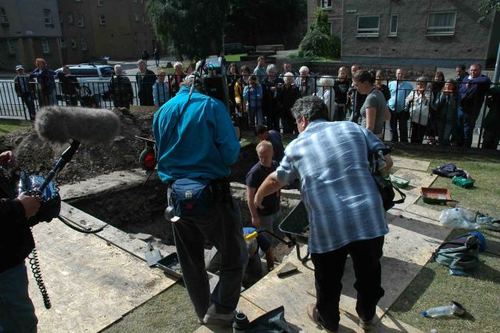 Alan’s dream began to disintegrate. Bleating sheep were scattering as the scarlet fire-engine, all bells and sirens at full blast, hurtled towards them. He knew he was about to die. Horribly. He was gripped by panic; then slowly his brain woke up. It was the phone. The bloody phone. Last night he’d been too tired to turn it off. He reached out and picked it up.

His sleepy eyes wouldn’t focus on the screen.

He hoped it wouldn’t be from a call centre in India. He didn’t want to be rude to some student trying to earn a living.

Alan? Alan? For an instant his woolly brain thought he was going mad. Then sanity returned: it must be Dr. Alan Scott, the soil micromorphologist in Cambridge. Earlier in the week he’d watched while Dr. Scott hammered sample tins into the still fresh face of the trench section, directly over Grave 2. Alan (Cadbury) thought these in situ samples might throw light on when the grave had been dug, relative, that is, to the start of the later Roman alluvial episodes. In other words, he wasn‘t expecting the equivalent of a radiocarbon date, but it could provide them with a reliable approximate picture. Both Alans had long been great believers in the power of soil micromorphology.

It had taken Dr. Scott several days to prepare and grind-down the thin sections before he was able to examine them under the high powered microscope. But he was clearly delighted with the results.

‘I finished last night, but thought you wouldn’t welcome a call so late, as I know you’ve been quite busy these evenings.’

‘And last night’s was good. We had it on in the Lab. The students cheered when the skull appeared. And that Tricia has won-over the blokes, big-time. You’d better watch it Alan, or she’ll up-stage you, unless you’re careful.’

‘I hope she does. I think she wants a career in TV, which is more than I do. But the samples?’

Small talk. He hated it.

‘Oh yes, the samples. Well, for once I think we took them from the right place and the sequence doesn’t seem to have been disturbed too much by post-depositional effects.’

‘No. So I think we’re deep enough down to be able to say some useful things.’

Alan’s sleepy mind had now fully woken-up. He wanted Dr. Scott to get to the point.

‘Yes, when we were digging we could see a very faint change in colour, which lined-up well with the edge of Grave 2. Is that what you spotted in thin-section?’

‘It is, I’m certain of that. And the other thing that’s very clear are the separate episodes of flooding, which form a series of quite distinct varves, about half a millimetre thick.

This was music to Alan’s ears. He’d first learned about varves when studying the history of archaeology at Leicester. They were first identified in Scandinavian glacial lake-beds in the 19th Century. But soil scientist Alan hadn’t finished:

‘I couldn’t spot any obvious standstill or weathering horizons, so I must assume the flooding was a regular annual event. And you say the pottery dates the start of alluviation to the later third century?’

‘Well, in that case the grave-cut was made some 15 centimetres, say three centuries of flooding episodes, later. I’d guess sometime between AD 600 and 650 – certainly no later.’

‘Well, no. There’s a standstill horizon almost immediately after the cutting of the graves.’

‘Any idea how long that was?’

‘That’s difficult to say. Maybe two or three centuries? Then flooding recommenced, but worse than before. This time the varves are at least twice as thick.’

‘Does that sound to you like they’d introduced flood-control measures? Maybe a cemetery wall, or improved local drainage?’

‘I’d go for the drainage,’ Dr Scott replied, ‘Walls tend to collapse, whereas drains were maintained.’

‘Yes,’ Alan was thinking aloud, ‘That certainly fits with the archaeological evidence. And we know the early monastic communities were keen to drain. It gave the Brothers something useful to do.’

That wasn’t quite fair, but what the hell. Alan felt elated. That call was just what he had wanted to hear.

Now that my second Alan Cadbury mystery is 77% funded it’s time to launch the final push. MANY thanks to everyone who has subscribed: you’re all stars! And if it’s not too much trouble, can I ask you to forward this blog post to your friends – who knows, it may whet their appetites? And any web-based support (FaceBook, Twitter etc.) would be much appreciated. I’m determined to have this book funded before winter sets in. Of course if you haven’t yet subscribed, it’ll cost you £10 for the ebook or £24 for the hardback (incl. post and packing). There are also more expensive options ranging from a signed copy (£50) to an intimate evening with Alan Cadbury (ha-ha). Click here and a have a debit or credit card handy.