Dear subscribers, as things currently stand, we have arranged that I’ll send a fully tweaked and edited manuscript of The Way, The Truth and The Dead to my editor, Liz Garner, at Unbound, by March 20th, the day we start lambing. Then she can work on it, while I slip into my ovine charge-nurse role. Once lambing’s over, I’ll have to respond to Liz’s edits, which will probably take a week or two.

Incidentally, Isobel Frankish, the Managing Editor at Unbound tells me that I’m currently the only one of their authors who keeps sheep. John Mitchinson of course keeps pigs, but I think everyone is agreed that pictures of woolly lambs trump snorting snouts every time. So my sheep photos always go down very well in the Unbound office. Sadly, we wont have any lambs till later in March, so here’s a picture of their expectant mums feeding on the hay we made last summer. And here, too, is an interesting fact: sheep have very sweet-smelling, odourless breath, unless they are having trouble bearing twin lambs, when suddenly a perceptive shepherd will detect a slight hint of acetone on the air. You then have to get close and personal with every ewe, sniffing their breath for that tell-tale smell. In-lamb ewes are very dignified, and if looks of disdain could kill… 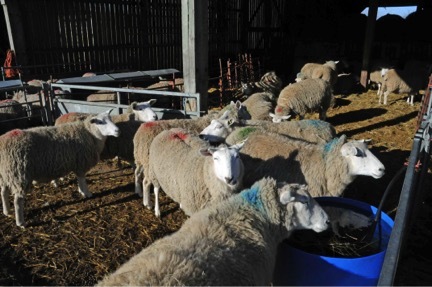 These Lleyn ewes will lamb after March 20th. The coloured marks show their male bloodlines. This is important to avoid inter-breeding.

Slightly later, and by now we’ll be well into the summer, we’ll have to think about a cover design. With any publisher the process of editing and designing a book takes from 6-8 months. Then of course there’s the printing. It’s something that can’t be rushed, and most writers don’t want to: the look and feel of a book has a big effect on its sales. I’ve spoken to the management folk at Unbound and they have huge reservations about trying to publish before Christmas. January and February tend to be rather dead months for book launches, which generally happen in the spring. So as things currently stand, it looks like your copy of The Way, The Truth and The Dead will be thudding onto your doormat sometime in the spring of 2017, although subscribers should receive their copies before the date it’s released to the trade. I’m only too aware that this must seem like a very long time, but I’m afraid these things can’t be rushed: good books take time to happen, even in our world of instant gratification. But rest assured, I’ll keep you fully informed if there are any changes to this schedule. For those who pledged to the Seahenge visit, this also won't happen until Autumn of this year.

While I’m on the subject of writing, I’m currently thinking about Alan Cadbury’s third adventure and a follow-up to my HOME book for Penguin. This book is about domestic life in pre-Roman Britain – and what it can teach us about our own lives. I’ll probably write the HOME follow-up first, as I find I need much time for my sub-conscious to mull over Alan’s plots. Since I’ve been creating his world and circle of friends, they’ve taken on lives of their own and I now find I can’t hurry things along: they have to take their time, if everyone is to remain true-to-character. I simply can’t imagine how so many crime authors – and good ones, at that – manage to churn out books every few months.

I know it must sound strange, having just announced that The Way, The Truth and The Dead won’t be appearing for just over a year, but I’m really looking forward to writing Alan’s third adventure. He’s been telling me about it – and it’s not very pleasant. Quite nasty, in fact.

Greetings Dr. Pryor,
I only just learned about Unbound from reading yesterday's blog post. I enjoyed reading about the lambing. I would love to support this book and I am especially interested in the tour of Seahenge with you! However, I will not be back to England until Autumn 2017 so I thought I might check with you first. If it is possible I would surely arrange my trip plans around the tour. Thank you, Teri Paul, Bluff, Utah