The Fens are open, flat and full of myths. One persistent myth is that Fenland is all the same; that there is no regional distinctiveness or identity. Outsiders cannot get beyond the straight roads, the even straighter dykes and the all-enveloping, level horizon. But the people are very different: yes, they do see themselves as Fen folk first and their county comes a distant second, whether it be any of the four Fenland counties: Lincolnshire, Cambridgeshire (ex-Isle of Ely), Norfolk or Suffolk. But the real social cement that links different communities together is a shared history of drainage. And contrary to popular opinion, the Fens weren’t drained by the Dutch in the 17th Century. Large areas were drained in Saxon times and in the Middle Ages. Other parts, such as huge swathes of south Lincolnshire were not reliably drained until the 18th and 19th centuries (with the introduction of steam pumps).

Certain other places, such as Wisbech, remained cut-off and semi-isolated for many centuries and as a result they acquired distinctive regional dialects and patterns of speech. Although they are only a twenty minute drive apart, around the southern fringes of the Wash, the accents of people in Wisbech and Holbeach are completely different. And it isn’t just the way words are pronounced: phrases and sentence-structure are utterly dissimilar. And I have to say that for me it’s the social diversity that gives the region its special appeal. That, and the churches. And the beer (my own favourites are Elgood’s, Bateman’s and Tydd Steam). Oh yes, and Laddie’s Ice Cream (Established in Holbeach, 1922: “Often licked, but never beaten”). But I digress.

I mentioned churches. In and around the Fens are some of the finest churches, abbeys and priories to be found anywhere in Europe. I spent most of my archaeological life from 1970 working within sight of Peterborough Cathedral, which was one of the richest Benedictine Abbeys in Britain before its Dissolution by Henry VIII in 1539. As early Norman buildings go it’s in the very top flight: right up there with Durham and Ely and it also possesses the largest and finest medieval (ca. 1250) painted ceiling in Europe, north of the Alps. And yet nobody seems to know about it! It’s a stunning building and one I visit repeatedly.

I've already talked about Ely, which of course is in a class of its own. And it’s here that I’ve set the second Alan Cadbury mystery, The Way, The Truth and The Dead. In my last entry for this SHED I showed a photo of this great church, the Ship of the Fens. As I was writing I became increasingly aware that Alan didn’t feel entirely at home in Ely. It’s hard to be specific why this was, because he never actually admitted as much to me. But I got quite a strong impression that he wasn’t at ease there. Until recently I didn’t know why. After all, Alan has always enjoyed church architecture – most archaeologists, even prehistorians, do – and you’d be pushed to find a better building than Ely Cathedral anywhere on the planet. Then it came to me: it’s all about scale and landscape. And in Alan’s case, where he grew up. I suppose you could say that Ely Cathedral is just too big for comfort. And the landscape in which it sits is, by Fenland standards, precipitous. The hills are indeed hilly, mountainous even, and the soil is dark, peaty and brooding. But how very different from the country around the smaller abbey church of Crowland (or Croyland) in the Lincolnshire Fens, a few miles north of Peterborough. This is where Alan was born, and where he spent his childhood. So that’s where I’d like to take you now. 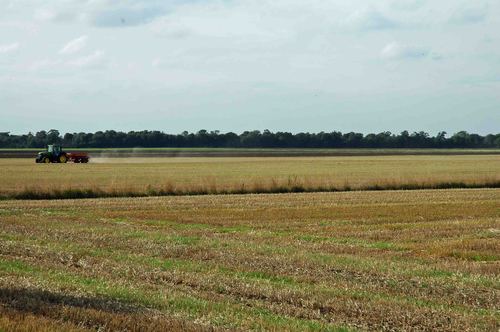 A typical Silt Fen field, near Crowland Abbey. Alan Cadbury spent his childhood on a farm near here.

It's a much gentler, but at the same time larger landscape than that around Ely. And there are far fewer contrasts: the natural, dry 'islands' barely protrude above the surrounding fens. Indeed I've found one or two that were actually buried by floodwaters in the Bronze and Iron Ages. And the soil isn't dark and peaty. Instead its pale and silty. In summer it dries almost white and it's extraordinarily fertile. After all, the Lincolnshire Fens are where most of Britain's supermarket vegetables are grown and the area around Spalding is the world capital of daffodil cultivation (now there's a fact I bet you didn't know. And it's got to be true, as Alan told it to me). The difference between silt and peat soils simply reflects how they were formed in the first place: peat grew in freshwater and silts were laid-down by the sea in major events, such as tidal surges, or great storms.

The abbeys of south Lincolnshire tend to be slightly smaller than Ely and Peterborough, but having said that, they'd be considered large almost anywhere else. There's something magical about the semi-ruins of Crowland Abbey, when seen across the fields. 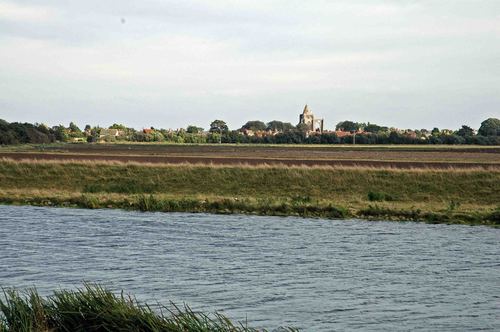 The Norman tower of Crowland Abbey, viewed across the River Welland in autumn. The 'island' of Crowland town is just visible, but it's very low.

But it's even better when seen close-up. And the statues and Norman doorways and arches are fabulous, too. And like Peterborough it was Dissolved in 1539, and has remained a hidden jewel ever since. And it has a colourful history having been destroyed and rebuilt before the Norman Conquest. 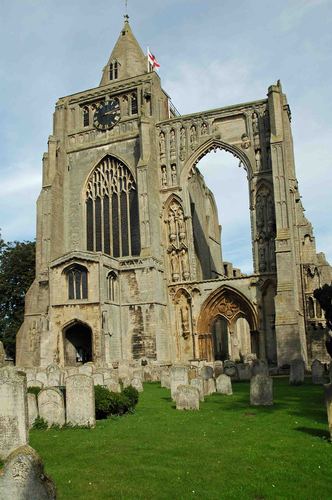 The west end of Crowland Abbey, as it survives as the Parish Church of St. Guthlac. The current church is housed in a small part of the once huge Abbey.

Then in 1643 the town of Crowland fell to Parliamentary forces, which should come as no surprise since Oliver Cromwell was a Fenman and the Fens provided the backbone of his New Model Army. And the tradition lingers on. I have heard older people say the 'The Fens were for Cromwell', with a certain pride. And like Alan Cadbury, I can sympathise: this was the birth of the modern world - and well over a century prior to the French Revolution of 1789. Anyhow, during the siege of Crowland Cromwellian soldiers lit a fire against the east wall of the Abbey and you can still see the reddened stonework. 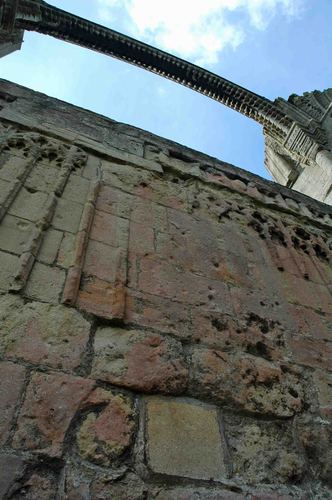 Fire-damaged stonework at Crowland Abbey, from the seige of 1643.

Alan Cadbury was born in January 1971 and throughout his childhood his mother used to do her weekly shopping in Crowland town. As a lad he used to love running up and down the steps of the unique 14th Century Triangular Bridge, with the strange, weathered stone statue, thought to be of Christ, which was probably taken from the ruins of the Abbey after the Dissolution. 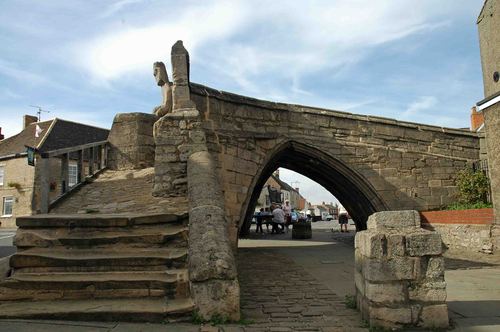 While Alan played on the bridge, his father would be in  the nearby pub. His  parents were tenant farmers to Lincs County Council some 5 miles from Crowland. Their holding (of  250 acres) at Crudens Farm, was just outside the almost deserted 18th century village of Hostland. Alan's elder brother Grahame inherited the tenancy, and is there to this day.

You've almost - ALMOST - sold the allure of flatness to me.