A bit more about Alan Cadbury

My books about the exploits of Alan Cadbury are based on a series of informal interviews or discussions between him and me. In the case of The Lifers’ Club nearly all our talks happened several months after the events I describe in the book. The only exception was the episode that started me writing the book in the first place. I happened to bump into Alan, purely by accident, in a pub in Crowland. He was returning to his brother Grahame’s farm in the Lincolnshire Fens and had stopped-off for a much needed beer on his way back from the outskirts of Leicester. I hadn’t seen him for a couple of years and it was good to renew our friendship. He then told me about the things he had just witnessed, which I immediately wrote-up on my return home, and which later became the Epilogue, the final scene of The Lifers’ Club. Anyhow, it was immediately apparent to me that the traumatic events described in the book had bruised his confidence and I flatter myself that our subsequent sessions in most of the pubs between Peterborough and Grantham had a restorative effect – greatly helped, of course, by the great food he was enjoying with his brother. Grahame’s wife Liz was, and is, a wonderful cook.

That scene described in the Epilogue happened in mid-July, 2010 and the book itself was researched that autumn. The first of many drafts was written-up over the following winter and spring. But I did nothing about finding a publisher, as all my time was taken up writing the last of my Britain books for HarperCollins and in promoting the paperback edition of The Making of the British Landscape for Penguin. I think it was the following year that I stumbled across Justin Pollard at the Hay-on-Wye Festival, where I’d been talking about The Birth of Modern Britain. Justin is, of course, a co-founder of Unbound. Just before we parted, he slipped me one of their freshly-printed cards which I discovered in the back pocket of my jeans a fortnight later, as I was chucking them into the laundry basket. And the rest, as they say, is history.

You must forgive this brief foray down memory lane, but it’s necessary if you want to understand my relationship with Alan during the writing-up of his latest exploit which I have called The Way, The Truth and The Dead – a title, I quite like, but which Alan finds a bit over-the-top. The thing is, archaeology is actually a very small world and unless you happen to be more than usually antisocial or unpleasant, you get to know most of your contemporaries reasonably well – certainly well enough to have a few – or more than a few – drinks with them. I’ve also found that archaeologists are far less sexist than many other professions; or to put that another way, men and women mix freely but without feeling obliged to take things further. Alan once told me  that God alone knows how many times at conferences and other gatherings he’d been helped to bed, after too many drinks, by women, who then went to their own rooms. And in a funny way, I find that rather uncreepy and comforting. Anyhow, like me, Alan’s probably got as many good female as male friends.

And that’s not a digression just to please feminists. Several readers have wondered why so many of the staff and diggers in Lifers (and indeed in The Way, too) are women. I’m convinced it’s got something to do with the sort of excavation you have to do on waterlogged sites. By and large there tends to be less of the heave-ho stuff on wet sites: less swinging of mattocks and grunting; more delicate work that requires dexterity and above all stamina, concentration and the ability to sit or lie in contorted positions on wet planks, for hours. Many younger men are so naturally pumped-up with testosterone that they simply cannot burn-off enough energy by gently manipulating a plasterer’s leaf. They need to pick, shovel and mattock, in a manly fashion. As a result, the teams I led in the eighties and nineties, when we dug now-famous sites like Etton and Flag Fen contained many more women than men. And the same applied to the teams Alan assembled in the first decade of this century. But it wasn’t a deliberate choice for either of us. I know for a fact that neither Alan nor I ever made the conscious decision that all young men were a waste of time – because they weren’t. It was far more subtle than that: somehow word got around among female students and diggers that working with waterlogged wood was stimulating and demanding.

I well remember taking the Etton team to London to receive an award which was presented to us by the late TV personality Magnus Magnusson. He asked me why all the people on stage, excepting me, were women. I must admit, it wasn’t something I’d noticed, as by now it was simply a fact of our lives. So I was lost for a reply – which isn’t something that happens to me very often. Meanwhile there were hundreds of eyes staring up at me, waiting for my response. But the words wouldn’t come. My mind was a panicky blank – and growing blanker. After a few seconds of this I started to feel extremely awkward, then one of the team, a young woman from Liverpool, with a strong Scouse accent and a deadly sense of humour replied loud, but drily: ‘You don’t understand Magnus, we’re Francis’s babes…’ BIG laugh. Phew, I was off the hook.

I started using PC-type computers back in 1978, just after I had returned to England from nine years working in Canada, at The Royal Ontario Museum, in Toronto. In those days North America was more computer-minded than the UK and I had determined to buy a PC when I was over there, but then I landed the job in England and the plan was put on hold for six months. Eventually I went to London and bought an Apple II with two five-and-a-quarter-inch disk drives. It had 16K RAM, which I upgraded the following year when I smuggled another 16K of chips into Britain, after a short trip back to Toronto, via Boston (Mass.), where silicon chips could be bought very cheap. I was warned that duty was charged on chips – hence their presence in my socks through Heathrow Customs. Anyhow, with the exception of the first two reports on my dig at Fengate, all my reports, books and papers have been written on various word-processing packages, starting with Apple Writer, then WordStar and currently Word. My interviews with Alan were recorded on an ancient cassette machine, which has subsequently died, but not before I had laboriously transcribed everything, by hand, word-by-word, onto a Word file. Then, just before last Christmas my laptop hard-drive crashed. Normally I’m very careful about backing-up all files, but not, it would seem, those transcribed Alan Cadbury interviews. But it didn’t really matter. I’d written both books – so what the hell. I thought no more about it.

Then yesterday I was checking through an unlabelled CD, looking for some of the many files of material I’d deleted during the extended editorial process – no, agonies is a better word – for The Making of the British Landscape (Penguin, 2011), when I came across the Alan Cadbury interview transcripts. And they make fascinating reading. In fact I’m tempted to offer some in these SHED blog posts soon. But first I must go through them carefully and cut out any bits that might spoil the story in the books that were eventually produced. While doing this background research I also came across a picture of me leaning against Alan’s ex-Army Land Rover, which he named Brutus. Readers of Lifers, might be familiar with this fine, if rather volatile, vehicle.

But now I have work to do: we’ve just topped 50% of our subscribers’ target for The Way, The Truth and The Dead and it’s time to give the campaign another shove. So persuade any friends who might be dithering that they must subscribe now, immediately. Do that, and I’ll buy you a drink when next we meet. Cheers! 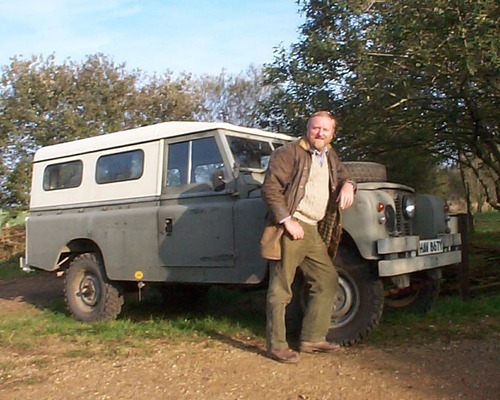