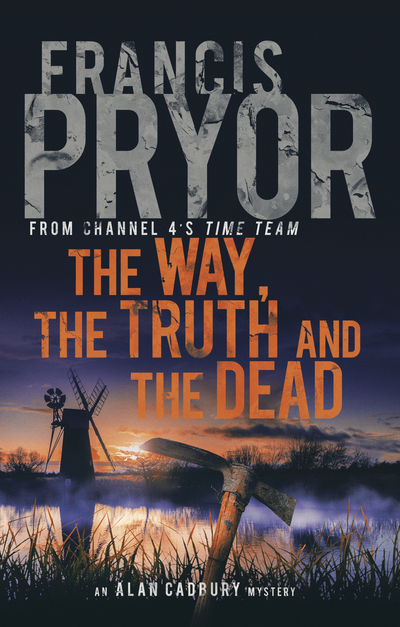 Fiction | History
You made The Way, The Truth and The Dead a reality. It's available in all good book stores now.
$8
149 pledges

Two places on a guided tour with Francis Pryor round his beautiful Fenland garden* followed by tea and homemade cake. Plus a signed first edition hardback, ebook and your name in the back of the book. *In partnership with the National Garden Scheme (September 2016)
$150  + shipping
29 pledges

Alan Cadbury is one of the luckiest men: his work is his passion. He’s a field archaeologist who excavates historic sites in the Fens of East Anglia. In his first adventure, The Lifers’ Club, he unravelled the background to a violent death on a dig in Leicester. The Way, the Truth and the Dead is his second adventure. Like The Lifers’ Club it is set in the Fens, but this time in the black peatlands of the south, around the glorious cathedral city of Ely. It’s a watery landscape where the many ancient dykes, drains and rivers conceal dark secrets. It’s a landscape where local communities retain long memories – some extending back to Cromwell’s time and the English Civil War.

In this novel Alan finds himself the Director of an important Roman and early Medieval excavation at the little hamlet of Fursby, not far from Littleport. But shortly before he starts work, he is contacted by his old friend, Detective Chief Inspector Richard Lane, who now works for Fenland CID. Lane needs Alan’s help because a body has been found in a river near the dig. And the dead person is an archaeologist, an old friend of Alan’s. It soon becomes clear that this is will be no ordinary excavation: the remains are of national importance and their preservation is outstanding. So it comes as no surprise when the major television series, Test Pit Challenge, decides to adopt it as a flagship project. We journey behind the cameras, and discover the complex personal rivalries of a modern ‘live’ television shoot. And to make matters even more difficult, the dig is open to the public, who flock to the site in their thousands.

Meanwhile, although deeply immersed in the archaeology, Alan finds himself drawn ever deeper into Lane’s investigations, where he uncovers dark secrets at the heart of this rural community…