Work today has been all wound around The Unwinding. Yesterday became a day of some panic as many of the files sent to Alison were the wrong file sizes. Too small. Not enough dpi! From the contact sheets she sent asking for higher res files it looked as if more than half the images were of not sufficient quality to be used in reproduction. This posed a problem with in excess of 1062 copies pledged for…….

There’s a time delay around the design. Alison now lives in Melbourne, Australia, and I find myself doing searches for ‘what time is it in Melbourne’. She’s a night owl. So when I was up early with coffee she was still up. We facetimed….. I had sent through files from my bank of images late the night before. And thank goodness most of these were ok. There were just a couple left that were still too low, but no worries, we had a couple spare.

She showed me the view from her window. A city at night spread out like a sea of stars. Meanwhile, as we talked, the cats behaved badly, but we managed to thread ideas together, and a text was sent across, unedited, but to give an idea of the amount of words, and the space needed. Such a distance away, half a world away, two seasons away and yet brought close by shared work. 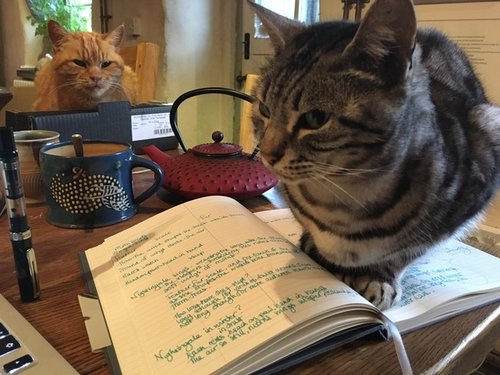 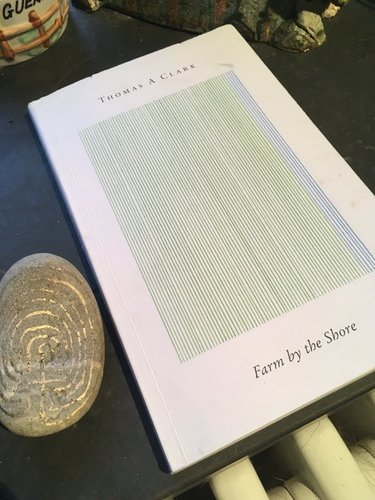 I’ve just read a beautiful book, one that I need to read again. Farm by the Shore by Thomas A Clark, published by Carcanet. I find myself seeking refuge in the work of poets these days, but am ignorant of where to turn, so when I was in Grasmere I asked Sam Reads bookshop if I could ‘subscribe’ to a year of reading poetry, curated by them. They have one of the best poetry sections I have seen in an indie shop. Every month they send me a book. This month it was Farm by the Shore. There is a sense of space, peace, silence in this book. A sense of grace. Much of that is what I would like in The Unwinding, but not in the same way. A chance for the words to breathe. And the images too.

Farm by the Shore is a beautiful book, one I will often return to. 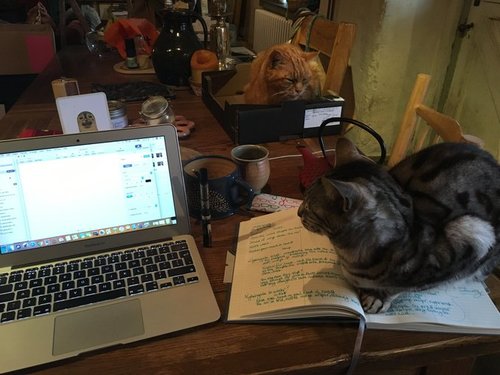 It was hard to write today. Worrying about files, trying to get some admin completed, and there were other hindrances. This is why cats are excluded from my studio.

Next came a long conversation with my agent, about the different things I am working on, about The House Without Windows, about Hay Festival.

And then Lizzie from Unbound called to talk through all that had happened in a meeting earlier in the day, while I had been talking with Alison. I’d had this idea a while back. Something different, unusual. It has just been given the green light from everyone, after all the costings and complications of trying to explain what it was, why it was important….Can’t say what it is yet, but I hope it will be met with enthusiasm and I am so pleased that Lizzie understood and championed it.

So, next week there’s a few exciting announcements coming, about The Unwinding, including a most marvellous launch with Number Seven. Sign up to their mailing list to be the first to know about it. They are the most wonderful emporium of delights, a fantastic place to visit, and will be selling the originals (that are left, as many sold years ago) and prints from The Unwinding nearer the time, including the painting of the woman with the rosehips, painted while in Dulverton. There will be 27 prints in total, for this image, and you can contact them to reserve one.

This week I am just glad that the files are ok, and The Bear and the Nightingale image from many moons ago has made it into the book along with just a few more words of unwinding. 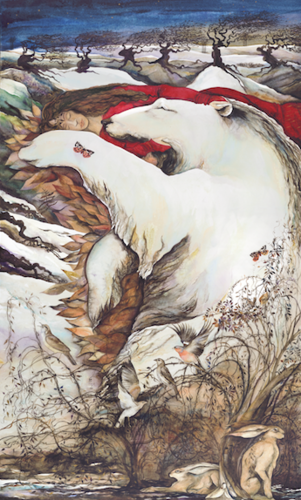 And now I am reading Girl, Woman, Other by Bernadine Evaristo and I fear it is a book I will become trapped in. Moving from voice to voice, forwards and back through time, it flows through the mind like clear, fresh beauty. Gorgeous. And it is published by Hamish Hamilton, who publish The Lost Words and The House Without Windows, who treat books as individuals, and who support and nurture the careers of writers. Even the design of this book is perfect, from the weight in the hand to how it sits in the eye to the texture of the cover paper. Already in it's sixth edition, maybe more by now, it's the joint winner of the Booker Prize. She's speaking at Hay Winterfestival on 29th November. I will be listening in the audience, learning. 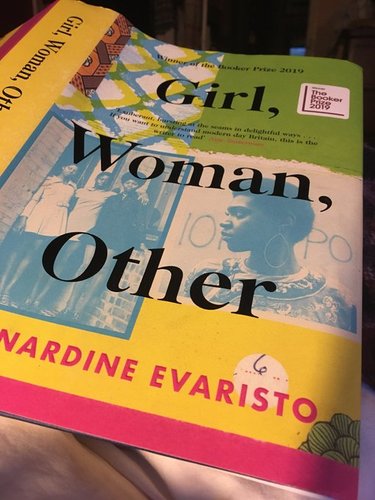 Absolutely look forward to your blog adventures. Your cat's are awesome and funny and make me smile so much! Typical of cats too to come and 'hang out' whilst you're working. My neighbor's cat Tiger often sneaks in my room through my bedroom window and lays all over my current art work or will literally sabotage/photo bomb photos I'm taking in the garden, she keeps me smiling!!

So looking forward to the Unwinding.

Thank you for sharing your beautiful mind, writings and art x