The Winter Queen and her Fox Lover.

This posting is a thank you to all who have taken The Unwinding to 108% funded in three short weeks. You can continue to support the book, by pledging for a copy. I hope to have a publication date soon, and the cover image should be revealed around Chriistmas time. These first editions from Unbound are always special things and everyone who supports can choose to have their name indexed in the back of the book.

Over the next few weeks as I work on the book I will post progress, in writing, in painting. Also I thought I would do some posts that are only available for supporters, so only those who have pledge the minimum of £20 and upwards will see these; prelim drawings from the paintings, gathered from 20 years of sketchbooks.

But for now, to say thank you, here is the first, maybe completed, short peice. It may change as the rest develops, and stories sit beside each other.

It began one winter's day, this story, when the fox ran across the pond that is on my neighbours' land. It's rare for the ice to visit St Davids, but this had been a sharp winter. The earth was hard with the cold and icycles hung from the cliffs, coated the grass around streams making curved enamelled sculptures of them. And it snowed. The origin of this story lay in the weather, the footprints of a hungry fox, the feathers of a frozen bird and a couple of blog posts.

But time, reading, and learning all call for re-writes. Also, the paintings were swapped in a bartering with Tamsin Abbott for beautiful glass work, and are framed and on the walls of her home. I had no scans of them, so needed to rework the images as I didn't want to take them away, scan them. 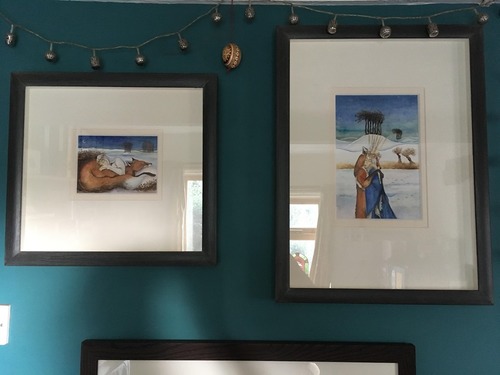 My notebook is carried with me at all times as I hunt for the words for each piece. Even in the film Mark made for The Unwinding campaign, the film that heads the main page, for I tend to write outside, walking to the top of the hill, with cat and dogs. And I wasn't pretending to write, as I sat there being filmed. Having forgotten that Mark was with me, I found the space to let words gather. It rained. The ink ran. And I reworked again and again over the past few weeks, up the hill, at teh beach, in sunshine. ( The Buzzard feather was given to me by Amy-Jane Beer at North Yorks Moors Gallery, where The Lost Words exhibition is hanging, for now) 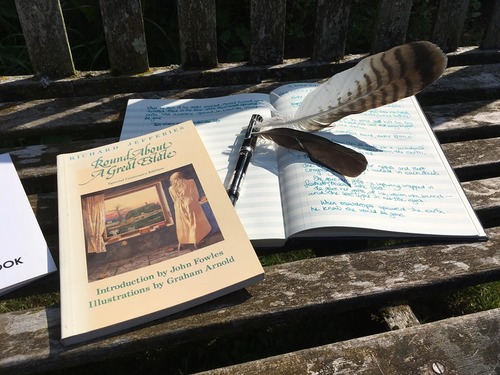 The Red Fox and the Winter Queen

In summer heat he longed for her.

When leaves turned, from green to gold, he watched for her.

As winter came, on feathered backs of redwing, fieldfare, and threaded through the call of curlew, he waited for her.

And when she came, earth under paw was iron hard.

And when she came water thickened, turned to stone.

Flakes fell from a sky dark as a jackdaw’s head.

She stole the colour from the land.

They danced. For three long winter nights and more.

They slept through the short times of light, curled in each other’s company.

She gave hime gifts; a lapwing wrapped in feathers, beaded with frost, a bowl of bright rosehips. 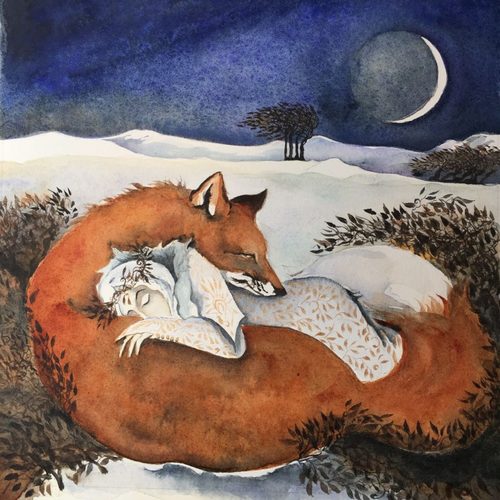 He gave her gifts, a crown of ice, threaded through with berries and golden leaves, feathers, and the light of love in his wild fox eyes.

When snowdrops speared the earth he knew she would be gone. The skin on the water of the pond wrinkled once more at wind's touch. Ravens turned and tumbled in courtship in the smalt-blue sky. Celandine shone at the feet of hedge-banks in constellations. Wheatears rode the ocean of air and touched the land. Swallows carried the promise of spring on azure backs.

He woke in the dimity light of dusk to owl song, and found her gone.

Far across the valley the keen yearning song of a solitary vixen called to his blood.

That is a beautiful story. Very touching. I’m brushing away a tear.

Thank you for the generosity of your updates. They are treasures in themselves.