On finishing a book

Five weeks on the road, trying to write, paint, think, and now I am home, and have been for a week and in that time I have finished writing The Unwinding.

It comes in at 4 084 at the moment, and is now with my agent who is having a look, editing. Though she did say that she didn't feel that it needed much editing. I've honed it back, worked over and over, read it to the cats ( and dogs). Written first in pen, then on the typewriter and then worked again on the computer I am hoping all will be well. And I am trying to keep faith with myself, though confidence always shakes, and there is so much going on.

The Secret of the Tattered Shoes has been published and was picked as a Sunday Times Book of the Week. It is illustrated so beautifully by Ehsan Abdoullahi and published by Tiny Owl. And The House Without Windows has been published and I will be talking about both of these on Saturday in Exeter at the Royal Albert Memorial Museum where The Lost Words exhibition will be opening, and also at Crickhowell Festival and Hay Winter Festival. 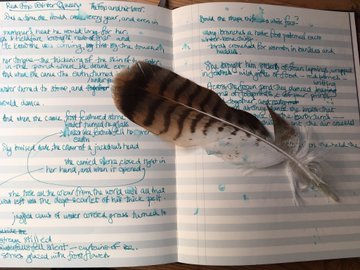 There is, as I say, so much to do. And it seems such a long time since I began working on The Unwinding and in many ways it is, as the paintings range over twenty years, but the words have grown over a matter of months, spun around the images, written across the country, in day-time and night-time. Some of the words arrived as dreams. Others came while walking.

Now the words need to settle, be read again, edited and crafted and then the words and the images will travel across the planet to Australia and into the amazing hands of Alison O'Toole, to be designed. I'm hoping to be able to do something very special, just for those who pledge for the book, but there will be more news on this soon. Something secret, hidden, inovative.

Meanwhile I have new books to work on and a book proposal being crafted and a manuscript to reada nd I really need more hours in the day so if you have a time machine please let me know so that I can share it!

And in the meantime also, from Friday 25th October I want to begin readings from Letters to the Earth in St Davids Cross Square, in support of the children's school strikes for Climate Justice. From 11 am, every Friday morning that I can I will take time away from my work to read poems, letters, writings from teh book, publishing in Novemeber called Letters to the Earth, and other poems about life on Earth. Perhaps when I can't be here I will stop, where ever I am at 11 and read there! Today a small group fo us gathered. Liz Daniels talked of the 'anxiety footprint'. My 'anxiety footprint' has been high of late which is why I decided to do this, despite the work I have to do, despite the deadline. I need to refocus, realise what is important. There's no point working on things like The Lost Words if life on Earth becomes incresingly challenged by human behaviour. So I decided to stop, read, and invite others to share. 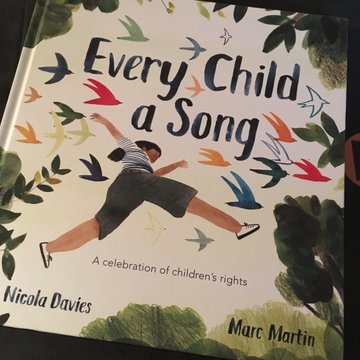 And I asked Nicola Davies to join me. She has spent her life writing books about our beautiful planet. And I asked her to read from Every Child a Song, because in London the Metropolitan Police, under government orders have banned all gatherings of The Xtinction Rebellion, making these creative peaceful protestors into criminals and treating them as terrorists, all of which is a direct attack on the human rights of us all. She read the book specifically to Leo, the youngest there, and during the reading this four month old child never took his eyes nor his ears off her.

Leo lives in Auctralia. His mother is taking the idea of peaceful protest through poetry back to Australia. I am asking people to come if they can, every Friday at 11 am to Cross Square, St Davids, and if they can't, to start their own group. Gather, read, share, inform, protest. Already this one, small group have thrown a circle around the world. Together we can form a network, of praise songs and poetry. 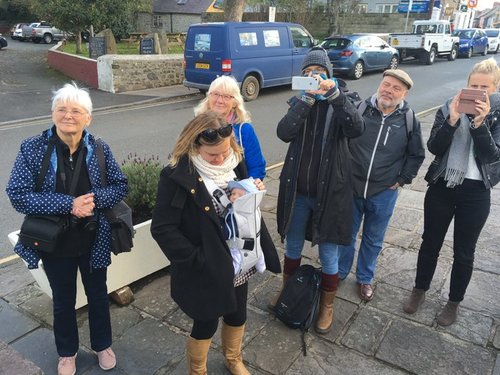 Having a launch at Solva Woollen Mill for the Letters to the Earth, through which fly my swallows, inked first for The House Without Windows. More news on this soon.

Meanwhile, thank you to all who came today. You liften my spirits.

Now, time to finish this book.

Thank you. I had forgotten that poetry can be protest: I needed that reminder today, and that shocks me. Too complacent, too easy to forget it's not just our desires that can be stolen and sold back to us, malformed, but everything we are and that includes our words. No wonder I am so bored with my own... I am looking in the wrong places for inspiration, reading recycled hearts.

Thank you Jackie. Each Friday at 11 am I will be reading an Earth poem wherever I am, and whoever I am with. Much love Kathy

Hello Jackie, thank you for the update. Your art and Robert Macfarlane's words in The Lost Words are potent and inspiring and just a page is all that's needed to bring some balance back to our lives. An unwinding of it's own.

We lived in Pembrokeshire for twelve years and moved back to England, Wiltshire, five years ago. We are visiting Pembs next weekend the main reason to visit a 97 year old friend in Solva who has been in poor health. We'll probably only see her for an hour or so because of her frailty. We haven't seen her for some time. We're arriving on Friday 25th but probably too late for the Letters to the Earth readings.

What you are doing brings hope and a reminder that we should all in our way try to make the world a better place by speaking for nature and humanity.

The Unwinding is anticipated but like a birth cannot be hurried.