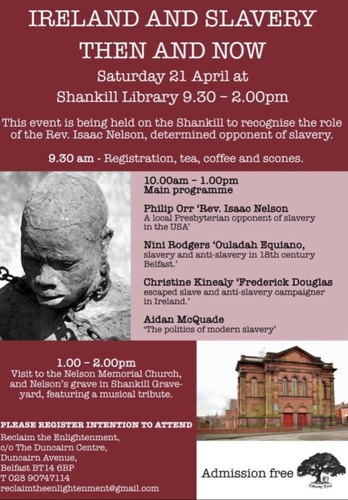 Last week I visited Belfast to speak at an event commemorating Belfast’s role in the anti-slavery struggle of the 19th Century. It was a memorable visit for a number of reasons.

The event, organised by Reclaim the Englightenment, a group set up to remember Belfast’s radical heritage, was held in the Shankill Public Library. It was the first occasion I ever spent any time in this, the heart of Loyalist West Belfast. During the 5 years I was at university in Belfast during the Troubles, the Shankill was a place to be avoided at all costs by nationalists like myself, for fear of serious injury or worse. It is still walled off from other parts of West Belfast, but with the abatement of much of the violence, it was a highly fitting place to gather to discuss Belfast’s Enlightenment tradition.

Presbyterian Belfast was not only the cradle of the United Irishmen, a revolutionary movement to which Eamon and Mick, the protagonists of the Undiscovered Country,  would have claimed historical allegiance. But it was also a vibrant part of the international anti-slavery movement of the 19th Century. In part the gathering was to commemorate Issac Nelson, Presbyterian minister on the Shankill, anti-slavery leader, and nationalist member of parliament.

The 19th Century anti-slavery struggle in Ireland was one that united Catholic, Protestant and Dissenter in common cause: Daniel O’Connell, the leader of Catholic Emancipation in the first half of the 19th Century was the leading anti-slavery voice in Westminster, upsetting one American ambassador to such an extent as to be challenged to a duel. He also was an inspiration to the great American abolitionist, Fredrick Douglass, who visited Ireland for a time and was warmly received by the Presbyterian abolitionists of Belfast.

Douglass was, to a certain extent, following a well worn path. The great African abolitionist Olaudah Equiano had also visited Belfast to campaign for an end to the trans-Atlantic Slave Trade, and also, I discovered, to seek subscriptions for the publication of his own book, “The Interesting Narrative,” his memoir of slavery, sea-faring, war and resistance.

The thought that Equiano over 200 years ago had to go through the same process of seeking subscriptions to have his book published makes me feel part of a tradition of struggling authors stretching back centuries. It would be great after all of this to be able to say something a quarter as memorable and important as Equiano achieved.

Much of the common cause that the different Irish traditions shared in the late 18th and 19th Centuries was torn apart and forgotten at the end of the 19th and beginning of the 20th Centuries as a result of both deliberate British policy and that of the nascent Irish state: the Belfast boycott that Dáil Éireann introduced during the independence struggle was ill-advised, and, as Sophia observes in The Undiscovered Country, the national liberation war it waged had quickly become a vicious civil war in the North.

Still, it was nice to stand in the Belfast sun for a while in the middle of the Shankill and remember for a moment when Irish people of all religions and none stood together as a nation in support of the greatest human rights struggle of the age. Perhaps we may one day again do the same.