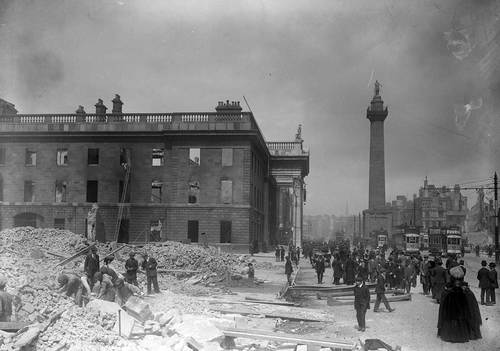 I went to see Sean O’Casey’s play The Plough and the Stars a few weeks ago. It was the celebrated 2016 Abbey Theatre production which got a belated transfer from Dublin to London.

O’Casey wrote the play to commemorate the 10th anniversary of the 1916 rebellion. It caused a storm. After one particularly rambunctious performance WB Yeats, a co-founder of the Abbey, confronted a disruptive audience of theatre-goers with the remarks, “You have disgraced yourselves again. Is this to be the recurring celebration of the arrival of Irish genius?”

It’s said some objected to the scene in which the Irish flag was paraded in a pub in which a young prostitute was plying her trade. But, of course, O’Casey could have shown worse things: the main military grouping featured in the play, Irish Citizen Army, of which O’Casey himself was an organiser, was originally founded to protect trade unionists from the brutalities of the Dublin Metropolitan Police. Such was the bad blood between the two that the Citizen Army seems to have frequently dealt summarily with any police who fell into their hands during the Rising. The bitterness and brutality that came to characterise the later stages of the Independence War and the subsequent Civil War was there, as in all wars, as soon as the swords were drawn.

The 100th anniversary of the beginning of renewed violence in the Irish War of Independence is in January 2019. Anniversaries, particularly centenaries offer time for reflection, of facing up to hard truths. I hope The Undiscovered Country will be published in time to contribute a little to these reflections. Because I believe the peoples of Ireland and Britain urgently need a more profound understanding of our shared European histories, particularly as some with rose-tinted dreams of imperial grandeur seem so intent on reopening wounds that many of us finally believed had been bound up.