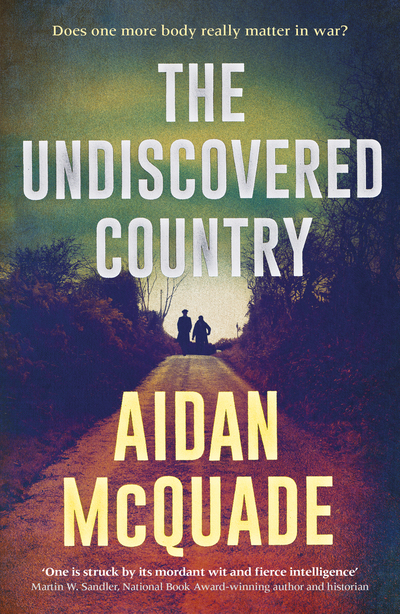 History | SALE
You made The Undiscovered Country a reality. It's available in all good book stores now.
FEATURED REWARD
$20  + shipping
4 pledges

A first edition of the hardback plus the ebook
Buy now

A signed first edition of the hardback plus the ebook and your name in the back of the book.
$105  + shipping
30 pledges

A print of the cover art, signed by Aidan plus everything at the signed level
$225  + shipping
7 pledges

Your place at a Dinner with Aidan at a London restaurant to discuss the book, plus a first edition of the hardback plus the ebook and your name in the back of the book.
$375  + shipping
6 pledges

Tea, Guinness and chess are central themes in the book, join Aidan to indulge in one, two or all three of them, plus a first edition of the hardback plus the ebook and your name in the back of the book.
$750  + shipping

Aidan will deliver a lunchtime talk at your organisation or company on the topics of the book, including moral courage and leadership, which Aidan has lectured on all over the world, and were the themes of his PhD. Plus five first editions of the hardback, five ebooks and your name in the back of the book.
$1,500  + shipping
1 pledge

Become the book's patron and have a special thanks printed in the front of the book, and Aidan will deliver a lecture to a venue/occasion of your choosing on, “Human Rights, Moral Courage and Leadership in the contemporary world”: both moral courage and leadership are core themes of the book which Aidan has lectured on all over the world, and were the themes of his PhD. Plus ten first editions of the hardback, ten ebooks and your name in the back of the book.

This is a book about murder most foul. It’s about murder in wartime, when one more corpse should really pass unnoticed amidst all the other carnage.

This is a book that has been born out of my unique perspective gained from growing up in South Armagh during the Troubles, and decades spent as a humanitarian and human rights worker dealing with the consequences of violence and injustice from Afghanistan to Angola.

I started writing this book because, in spite of the bloodshed that still disfigures so much of the world, too many people, particularly political leaders, still seem to have such a glib view of war as to be ready to blunder into it at the earliest convenience.

This book is an important one because it seeks to put a human face to the savage complexities of war and its consequences.

It is set during the Irish War of Independence in 1920 in a part of the West of Ireland from which all British administration, including the Constabulary, have been driven. Two members of the IRA on police duty find the body of a young boy, apparently drowned. But one of them, a veteran of the First World War, recognises violence when he sees it. So, in spite of a complete lack of detective experience, the two set out to see if they can find some measure of justice for the murdered child.

Neither of them realise just how dangerous their task will become.