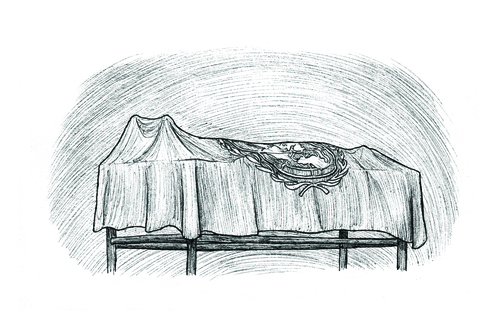 On the very last day of May, Captain Mbaye was driving back to UN headquarters, when a mortar shell landed behind his jeep.

Shrapnel entered through the back window and hit Mbaye in the head, killing him instantly. The mortar had been one of the many fired by RPF forces at the Rwandan Army checkpoint.

Gromo made it to UN headquarters just as Captain Mbaye’s body arrived. General Dallaire received the body and placed it carefully on the table that had been set up in the main lobby of the Amhoro Hotel. The shrapnel had created a small entry wound.  Captain Mbaye looked as if he was only sleeping.

And the preparations began to prepare the Captain for his final journey. Eventually the Senegalese captain’s body was laid out perfectly, the edges of the blue plastic sheeting carefully folded in precise creases, even covering his oversized boots. A UN flag placed on top.

Gromo followed the body to the airport. The full Senegalese contingent stood at attention. Standing rigid, Colonel Tikoka, General Dallaire and General Anyidoho saluted the coffin of the captain as it entered into the bowels of the C-130.

Later, surprised by Gromo’s absence during General Dallaire’s evening prayers, I searched for him and found him in his room with the lights off. Gromo was determined to leave Rwanda. The deaths first of Florence, and then of Captain Mbaye, were too much for him to deal with. He needed to get out.