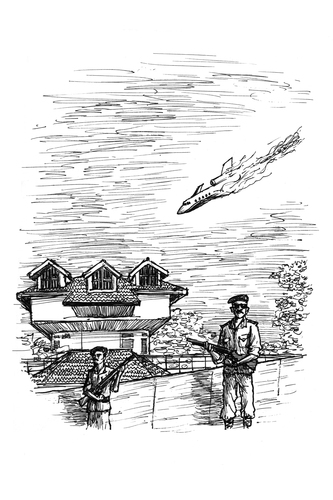 The event that triggered the Rwandan Genocide occurred between 20h00 and 21h00 on the evening of 6 April 1994. A Dassault Falcon plane carrying the Presidents of Rwanda and Burundi was struck just as it was making its final approach onto the runway of Kigali airport. The first surface-to-air missile tore off a wing. The second missile hit the tail. The plane burst into flames and exploded on impact in the garden of the presidential palace.

Controversy still rages on the question of who shot down the plane. Some contend that it was forces loyal to General Paul Kagame, the commander of the Tutsi rebel army, the Rwandan Patriotic Front, better known as the RPF. General Kagame wasn’t satisfied with the outcome of peace talks being held in Arusha, Tanzania, they suggest. He shot down the plane knowing full well that it would trigger reprisals against Tutsis in Rwanda and enable him to take control of the country. If this is true, then Kagame was complicit in the genocide of his own people.

Others however point to the flaws in this argument. Peace talks looked set to give the RPF, who represented only some 15 per cent of the population, more than they could have hoped for: a 40 per cent representation in the army and a coalition government in which they would play a prominent role. Moreover, the two missiles that shot down the presidential plane were launched from the barracks housing the Presidential Guard and other units totally loyal to the existing regime.

What is irrefutable is that the plane’s destruction signaled the start of the bloodiest mass slaughter since the end of the Second World War. In Rwanda, in a period of only one hundred days, approximately eight hundred thousand Tutsis and fifty thousand Hutus were murdered. At times, there were per day more killings in Rwanda than in the three industrialized Nazi death camps - Belzec, Sobibor and Treblinka – combined.

I arrived in Rwanda as the Deputy UN Humanitarian Coordinator about a month into the killings. My best friend, Gromo Alex, went to great lengths to persuade me to join him. What was going on in Rwanda was, he insisted, beyond anything that I could imagine. Most of the UN had decamped to Nairobi, and he needed support.

Numerous witnesses identified the UN colleague as managing a number of roadblocks during the genocide, with one even conveniently located in front of his own house. The city of Kigali, situated at the heart of the country, is built on eleven ridges with valleys between. The roadblocks supposedly managed by the UN colleague were positioned on a colline known as Nyamirambo. This hill was also the site of the UN offices, of the Sisters of Charity orphanage, and of the Hotel Mille Collines.