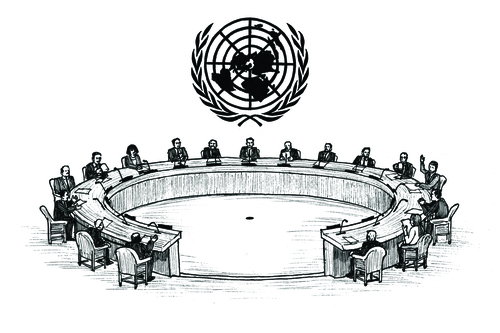 Between day one and day ten of the Genocide more than thirty thousandpeople -Tutsis and moderate Hutus - had been killed.

In April 1994 the UN Security Council consisted of five permanent members (China, France, Russia, the UK and the US), five members who were starting their second year (Brazil, Djibouti, New Zealand, Pakistan, and Spain), and five new members who had been elected the previous October (Argentina, Czech Republic, Nigeria, Oman, and Rwanda).The Security Council had at this time several issues to deal with: Bosnia and Herzegovina, above all, but problems also in Georgia, Iraq, El Salvador, Israel, and in the relationship between Libya and Chad.

Of course, as always in the Security Council, there was debate about the extension of various UN peacekeeping mandates. On the 5 April, the UN mission in Rwanda had been extended. The United States was wary of peacekeeping operations after the Somalia debacle in which 18 of its elite troops had been killed and a further 73 wounded.  Discussions in Washington in response to Somalia had culminated in Presidential Directive No. 25, which created a ‘vital national interests test’ for any US involvement in a foreign intervention. US officials on the Security Council understood this as an instruction to thwart any attempt to mandate new missions, and thereby to avoid for the US the embarrassment of a refusal to participate.

In the afternoon of 6 April, the Security Council learned of the catastrophe at the airport in Kigali. Was the plane crash that killed the presidents of Rwanda and Burundi an accident or an assassination? Rwanda’s permanent representative to the UN, Ambassador Jean- Damascene Bizimana, strongly asserted that this was an act of terrorism perpetrated by the RPF.France quickly backed up this claim, but the other members of the Council were more hesitant.

Over the next days, the Security Council met repeatedly without coming to any conclusion. Then the Belgian Government announced it was withdrawing its troops. Finally spurred into action, the Council requested the UN Secretariat to prepare a report on available options. The report was promised immediately. By the end of the first ten days of the genocide, it had still not been provided.