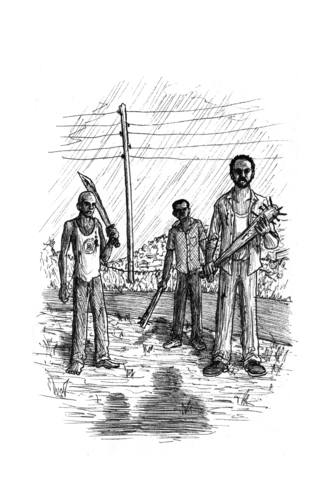 In those early days of the genocide, it couldn’t have been a simple matter to induce individuals to kill. Those many involved in the killings in Kigali were city dwellers, who would have had few opportunities to participate in the preparatory phase of the genocide. Interahamwe militia leaders would have had to keep a close eye on their men to ensure that they complied.  But they would have been helped by the tension engendered by the operations of other Interahamwe groups roaming nearby, by the shrill sound of their whistles as they chased down escaping victims. The whole of Kigali was in the throes of mass murder.

Still, there must have been one or two reluctant killers. How would a militia leader deal with them? Would he have taken a recalcitrant aside, and while sharing a bottle of Primus, explained the necessity of the actions? Did he, I wonder, then follow an approach that was once described to me?  The way to deal with a reluctant killer, I was told, was to provide more beer, designate a Tutsi, and order that Tutsi killed. Generally, my informant said, this did the trick. And if there was one insubordinate who still held back? One who would unfailingly shuffle to the side when the killings happened?  Such a person, it was explained to me, was dangerous to the cohesion of the group and should be used as an example.  One evening, when the day’s work was done, and after consuming large quantities of beer, all the men would have been taken to an open area and told to form a circle. The recalcitrant would be placed in the middle of this circle, along with a young Tutsi girl. He would be taunted and pushed back into the centre each time he tried to get out. The girl would kneel on the ground, crunched up into a ball, her cries drowned by increasingly angry shouts of “kill! kill!”from the men around her.  If he continued to resist, then one of the men would enter the circle, machete in hand. He would dispatch the girl with one swift blow and then, with a mighty swing, decapitate the recalcitrant. This was a very effective way, I was told, to ensure that every single man did his murderous duty.