The Triumph of Evil – May 7 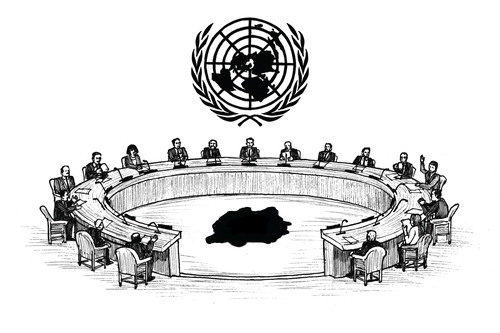 By day thirty, approximately 300 thousand Tutsis and moderate Hutus had already been murdered.

It is only towards the last days of April that the UN Security Council received from the UN Secretariat the much-anticipated report on options for the UN mission. Following the withdrawal of the Belgian contingent, the UN mission was down from its initial 2500 men to 1700[1]. The UN Secretary General presented three options for the UN mission. One of them was a total withdrawal of UNAMIR; the second, to leave only 270 soldiers in the country; and the third, to beef up UNAMIR to several thousand soldiers, with a new use of force mandate under Chapter 7 of the UN Charter.

The report didn’t end the disputes within the Security Council.  The non-aligned nations wanted to strengthen UNAMIR. The United States pressed for a complete pull out. No mention whatsoever was made of a role for the UN in stopping the on-going carnage.

The resolution that was finally adopted allowed for 270 UN troops to remain in the country, while the rest would withdraw to a nearby base in East Africa. They would become an over-the-horizon reserve without an explicit mandate to intervene.

The new resolution was regarded as a disaster by a number of the representatives, especially those from smaller countries. Not only would UNAMIR not be strengthened, it would be reduced to a minimum military force capable only of its own protection. Thousands of civilians who until then had had some protection from the UN had effectively been handed over to the killers. General Henri Kwami Anyidoho of Ghana, who was the Deputy Force Commander in Kigali, posed a chilling question: did the UN feel able to abandon Rwanda because the killings only concerned the ‘dark continent’?

The New Zealand representative, Colin Keating, had been shocked by reports he had received from NGOs working on the ground - reports far more detailed than those the UN Secretariat had provided for the Security Council. He tried to use his position as President of the Security Council for the month of April to push through a Presidential Statement that would clarify events in Rwanda. But he faced strong opposition.  The French Permanent Representative refused to attribute the killings to the interim government. It was the Tutsis and the RPF who were the aggressors, he insisted. The British representative argued that to base a presidential statement on information obtained from NGOs would turn the Security Council into a laughing stock. The US representative, keen to avoid any discussion of the deployment of a bigger UN force, attempted to downplay events in Rwanda altogether.

The text of the statement took days to negotiate. It seemed that some of the member states were trying to prolong the process beyond the end of the month of April, knowing that the new President of the Security Council would not want to pick up the agenda of his New Zealand predecessor.

On the evening of 28 April, the smaller countries effectively called the opposition’s bluff. New Zealand proposed to submit a new Resolution.  While a Statement needed endorsement from all members of the Security Council, a Resolution - unless it was vetoed by one of the Permanent Five - could pass with only a majority vote.   This placed France in an uncomfortable position.  If it wanted to prevent the Resolution going through, it would have publicly to veto an expression of concern for Rwanda.

A frantic new round of discussions started, aimed at finding common ground between France’s insistence that blame be divided equally, and the insistence by New Zealand, the Czech Republic, Canada and several others that the killings be declared the work of Hutu extremists. The UK Permanent Representative saved the day by suggesting a phrasing that ran as follows: “Attacks on defenceless civilians have occurred throughout the country, especially in areas under the control of the armed forces of the interim government of Rwanda”.

[1]General Dallaire had refused to leave and had insisted on keeping as many troops as he could get. Canada, alone among all the nations involved, then sent in about a dozen military officers to cover off slots abandoned by the Belgians.