The Triumph of Evil –June 21 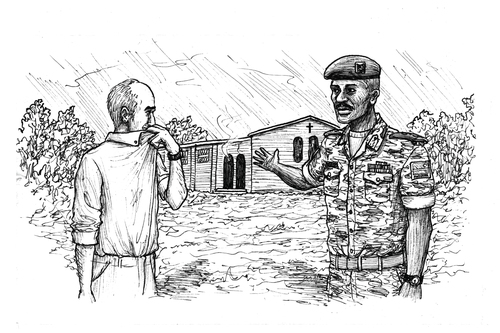 As we walked into the undergrowth, Rwandan Rebel Lieutenant Fiacre asked me: “Why are you here?  Why didn’t you leave with all the others?” …

The others?I pointed out that a number of us had remained behind.

“But for what purpose?” Fiacre insisted. “So you can witness the results of your cowardice? So your conscience can be cleared simply by being present? At the beginning, you could have done something to stop the killings,” the officer said. “But no, you left.” Some like me had remained behind, I said. But to what purpose?

We walked for twenty, thirty minutes, first over flat ground, and then climbing upwards into a forested area. Night had fallen. It was very dark and difficult to see the path. Fiacre turned on his torch and walked ahead with the beam pointed to the ground.

Early on, I caught a faint whiff of a nauseatingly sweet smell. It was whisked away by a breeze, but it came back as we advanced. “We are almost there,” Fiacre called back to me.

And then suddenly we broke through into a clearing.  The officer shone his torch on the façade of a small chapel. The smell was now so overwhelming that I couldn’t stop myself from gagging.

Fiacre sneered. “Can’t take it?” he said. “I thought you were here to observe.” Gesturing to the door of the chapel, he snapped: “So observe!”

I entered. The beam of my flashlight swept the interior of the chapel. It shone on layers of rotting corpses covering the deeper layers of bloated bodies that lined the pews. The dominant tone was a dark reddish brown and the stench was unbearable. I held the front of my shirt over my nose forced myself to take in every detail of the scene in front of me.

Then I walked out.