The Triumph of Evil - April 28 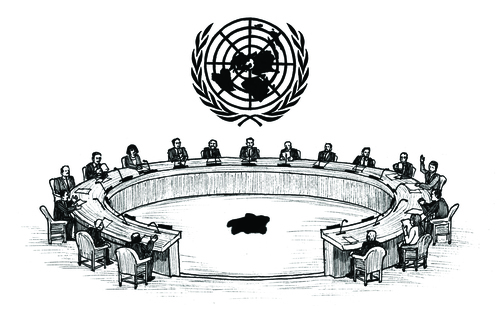 By day twenty of the genocide more than one hundred thousand Tutsis and moderate Hutus - men, women and children alike - had been murdered.

Two conflicting positions emerged within the Council.  In tandem, the Rwandan and French Permanent Representatives, backed by Djibouti, framed the killings as part of a civil war. But the other Council members weren’t convinced.

The Czech Representative drew the attention of the Security Council to a New York Times 14 April opinion piece written by Frank Smyth from Human Rights Watch. Drawing on information from experts from the NGO community, thearticle argued that the slaughter was not an accidental side effect of civil war, but was deliberately instigated and organised. Rwanda was ruled, the article explained, not by the late President Habyarimana, but by a small Akazu clique led by his wife. Slaughtering their opponents, Tutsis and moderate Hutus, was the only way the Akazu could hold on to their twenty-one-year-old rule. The Akazu needed weapons, and found an ally in France, which was concerned above all with maintaining la francophoniein Rwanda.

When the Czech representative raised the article in the Security Council, the French Ambassador immediately dismissed the analysis as nothing but rumours. The Rwandan and Djibouti Ambassadors then did their best to disparage the article further. That may have been the wrong tactic, for it only strengthened the impact the article had on a number of the Security Council members. In particular, those members representing smaller nations refused to accept the simplistic interpretation of events advanced by Rwanda and France.

The Security Council pressed yet again for the UN Secretariat to present its report on options for the UN Mission.

[1]The summary of the Security Council deliberations benefited from the excellent piece written by Kovanda, Karel (2010) "The Czech Republic on the UN Security Council: The Rwandan Genocide," Genocide Studies and Prevention: An International Journal: Vol. 5: Iss. 2: Article 7.